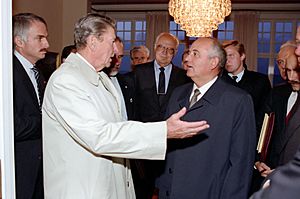 Reagan and Gorbachev in Höfði

The Reykjavík Summit was a meeting between U.S. President Ronald Reagan and General Secretary of the Communist Party of the Soviet Union Mikhail Gorbachev.

It was held in Höfði in Reykjavík, the capital city of Iceland, on October 11–12, 1986. This was during the Cold War. The talks focused on peace between the United States and the Soviet Union.

The talks failed near the end of the meeting. However, the progress that had been made eventually led to the 1987 Intermediate-Range Nuclear Forces Treaty between the two countries.

All content from Kiddle encyclopedia articles (including the article images and facts) can be freely used under Attribution-ShareAlike license, unless stated otherwise. Cite this article:
Reykjavík Summit Facts for Kids. Kiddle Encyclopedia.