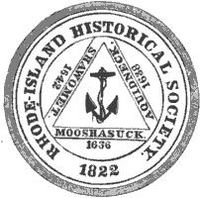 The Rhode Island Historical Society is a privately endowed membership organization, founded in 1822, dedicated to collecting, preserving, and sharing the history of Rhode Island. Its offices are located in Providence, Rhode Island. 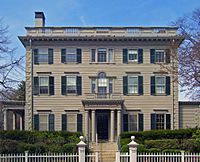 The Nelson W. Aldrich House in Providence, a National Historic Landmark that serves as the society's headquarters.

The Society has the largest and most important historical Rhode Island collection within its main library and two museums. The Society's collections include some 25,000 objects, 5,000 manuscripts, 100,000 books and printed items, 400,000 photographs and maps, and 9 million feet of motion-picture film. Through the Newell D. Goff Center for Education and Public Programs, the Society offers a variety of educational programs including workshops, lectures, films, and walking tours of Providence. In recent years the Society has been very active in teacher-training programs seeking to improve the quality of history teaching in Rhode Island. The Society also presents exhibits, films, concerts, and many other community activities and programs. The Society publishes its journal Rhode Island History in either two or three issues annually covering various aspects of Rhode Island history from pre-colonial to recent.

The Society’s most noteworthy recent advances include its first on-line collection access catalog and the first major restoration of the historic John Brown House, a $2.5 million project that should be complete in 2010.

The Society owns and operates the following notable museums and properties:

All content from Kiddle encyclopedia articles (including the article images and facts) can be freely used under Attribution-ShareAlike license, unless stated otherwise. Cite this article:
Rhode Island Historical Society Facts for Kids. Kiddle Encyclopedia.