Richmond Hill is a hillside suburb above Sumner in Christchurch, New Zealand. 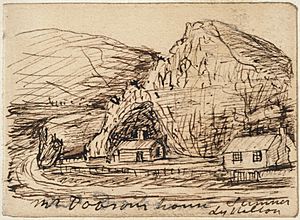 Two small buildings in Sumner, one of which belonged to Dobson and was located in Nayland Street (pencil sketch, 1865)

Richmond Hill is a volcanic spur extending from Tauhinukorokio / Mount Pleasant. The first European owner was Edward Dobson, who had a cottage in Nayland Street and whose 50 acres (20 ha) ran up the hill. Dobson kept 2 acres (0.81 ha) around his house and sold the remainder of his land to George Day. Upon Day's death, the land passed to his daughter, who sold it to the Morton brothers (Arthur and R. M. D.), and who in turn sold it to George Humphreys. The latter subdivided the land and had a road up the hill built by 1909. Walter de Thier managed Humphreys' farm on the hill and his favourite song was "The Lass of Richmond Hill", and with Humphreys' consent, the property was called Richmond Hill.

Humphreys was a leading businessman who lived at Daresbury in Fendalton. He was also a member of the Christchurch Golf Club and took pity of a group of men who regularly met in Sumner on an empty section for an improvised game of golf using hockey sticks, tennis balls, and tin cans sank into the ground as holes. He offered them 40 acres (16 ha) of his undulating land, on which the 12-hole Richmond Hill Golf Course opened in April 1910.

Due to the steepness of the road up from Nayland Street, the subdivision was slow to develop. There were just ten houses on Richmond Hill by 1930, and activity only picked up after the end of World War II. One of the early residents included the architect Cecil Wood. The golf course closed in December 1997 and some of the land was further subdivided.

Although some people objected to giving their religion, 57.7% had no religion, 33.1% were Christian, 0.8% were Buddhist and 0.8% had other religions.

All content from Kiddle encyclopedia articles (including the article images and facts) can be freely used under Attribution-ShareAlike license, unless stated otherwise. Cite this article:
Richmond Hill, New Zealand Facts for Kids. Kiddle Encyclopedia.