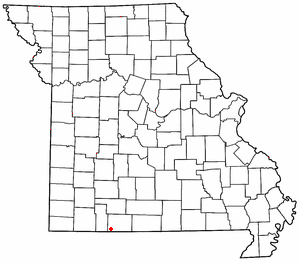 Ridgedale is an unincorporated community in southern Taney County, Missouri, United States. It lies approximately ten miles south of Branson on U.S. Route 65, about one-half mile north of the Arkansas state line. The community is part of the Branson, Missouri Micropolitan Statistical Area.

Ridgedale first had a post office in 1912, which closed the same year, and reopened in 1933, since which time it has remained open continuously.

All content from Kiddle encyclopedia articles (including the article images and facts) can be freely used under Attribution-ShareAlike license, unless stated otherwise. Cite this article:
Ridgedale, Missouri Facts for Kids. Kiddle Encyclopedia.