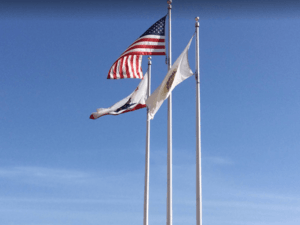 The Rincon flag next to the California flag and US flag.

The Rincon Band of Luiseño Indians are a federally recognized tribe of Luiseño who live on the Rincon Indian Reservation in the Valley Center CDP, San Diego County, California. It is one of six such tribes in Southern California that are composed of Luiseño people. The Luiseño are considered one of the groups of the California Mission Indians.

The band developed the Harrah's Resort Southern California (previously known as Harrah's Rincon Resort and Casino) that is located on the reservation, as well as Rincon Reservation Road Brewery, the first tribally-owned craft brewery in Southern California. The tribe is a member of the Indian Health Council, which runs a health clinic on the reservation, adjacent to the casino.

The population on the reservation is around 1,500. In the 2010 census, 188 people in the Valley Center CDP (census-designated place) self-identified as Native Americans. Tribal enrollment is about 651.

All content from Kiddle encyclopedia articles (including the article images and facts) can be freely used under Attribution-ShareAlike license, unless stated otherwise. Cite this article:
Rincon Band of Luiseño Indians Facts for Kids. Kiddle Encyclopedia.