Flag of California facts for kids

The Bear Flag is the official flag of the U.S. state of California. The precursor of the flag was first flown during the 1846 Bear Flag Revolt and was also known as the Bear Flag. A predecessor, called the Lone Star Flag, was used in an 1836 independence movement; the red star element from that flag appears in the Bear Flag of today. 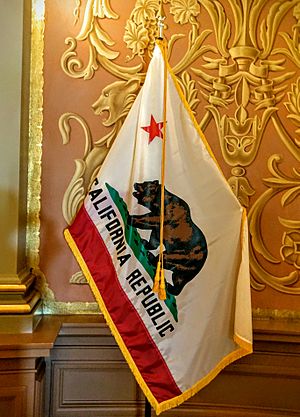 Metrics for the Flag of California

The first official version of the Bear Flag was adopted by the California State Legislature and signed into law by Governor Hiram Johnson in 1911 as the official state flag.

In 1953, the design and specifications for the state flag were standardized in a bill signed by Governor Earl Warren. The Californian state flag is often called the "Bear Flag" and in fact, the present statute adopting the flag, California Government Code Section 420, states: "The Bear Flag is the State Flag of California."

Under California Government Code Section 439, the regulations and protocols for the proper display of the flag of California is controlled by the California Adjutant General:

The Adjutant General shall, by regulation, prescribe rules regarding the times, places, and manner in which the State Flag may be displayed. He shall, periodically, compile the laws and regulations regarding the State Flag. Copies of the compilation shall be printed and made available to the public at cost by the Department of General Services.

When the flag is displayed vertically, it is rotated 90 degrees clockwise such that the bear and star face upward and red stripe is on the left.

The flag is also used as the state ensign.

The modern state flag is white with a wide red strip along the bottom. There is a red star in the upper left corner and a grizzly bear facing left (toward the hoist) in the center, walking on a patch of green grass. The size of the bear is 2/3 the size of the hoist width and has a ratio of 2 by 1. The grass plot has a ratio of 11 to 1. The five-point star is taken from the California Lone Star Flag of 1836. 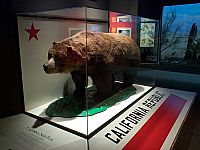 Official rendering of the bear

The bear on the current flag of California is claimed to have been modeled on the last Californian grizzly bear in captivity. The bear, named "Monarch", was captured in 1889 by newspaper reporter Allen Kelley, at the behest of William Randolph Hearst. The bear was subsequently moved to Woodwards Gardens in San Francisco, and then to the zoo at Golden Gate Park. After the bear's death in 1911, it was mounted and preserved at the Academy of Sciences at Golden Gate Park.

The 1953 law includes an official black and white rendering of the bear as well as the plot of grass and brown tufts. This drawing and other specifications that define the flag's colors and dimensions are identified as "54-J-03".

In 2001, the North American Vexillological Association surveyed its members on the designs of the 72 U.S. state, U.S. territorial, and Canadian provincial flags and ranked the flag of California 13th.

The 1953 legislation defined the exact shades of the Californian flag with a total of five colors (including the white field) relative to the 9th edition of the Standard Color Card of America (now called the Standard Color Reference of America). It is one of only four US state flags that does not contain the color blue (the other three being Alabama, Maryland, and New Mexico). 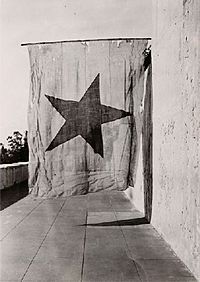 In 1836, a coup led by Juan Alvarado declared Alta California's independence from Mexico. Declaring himself governor, Alvarado recruited American frontiersmen, led by Isaac Graham, to support him. The rebels easily captured the capital Monterey, but were unable to convince southern leaders such as Juan Bandini and Carlos Antonio Carrillo to join the rebellion. Faced with a civil war, Alvarado and the other Californios negotiated a compromise with the central government wherein California's leaders accepted its status as a "department" under the "Siete Leyes" Mexican constitution of 1836, in return for more local control. Alvarado was appointed governor the next year.

The Lone Star Flag of California, associated with Alvarado's rebellion, contained a single red star on a white background. One last original flag is archived at the Autry National Center. 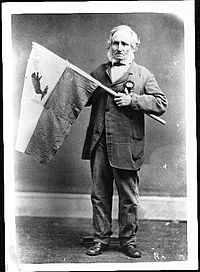 The first Bear Flag with its designer, Peter Storm, c. 1870. 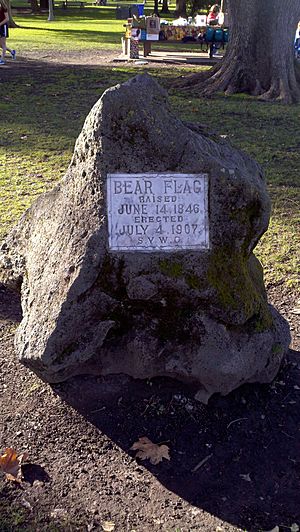 Digital reproduction of the first official Bear Flag, credited to Pio Pico, affixed to the bottom of California's Declaration of Independence of 1846.

The original Grizzly Bear Flag was designed by Peter Storm. Versions of Storm's Bear Flag were raised for the first time in Sonoma, California, in June 1846 on a date between the 14th and the 17th, by the men who became known as the "Bear Flaggers", including William B. Ide. The exact creation date is at least somewhat unclear. However, U.S. Naval Lieutenant John Missroon reported the flag's existence as of June 17, 1846.

One Bear Flag was designed by William L. Todd, a cousin of Mary Todd Lincoln. According to the book Flags Over California, published by the California Military Department, the star on the flag began in the 1836 California Lone Star Flag. William Todd, in an 1878 letter to the Los Angeles Express, states that the star was drawn using blackberry juice and in recognition of the California Lone Star Flag. The bear was designed to be a symbol of strength and unyielding resistance.

According to the Sonoma State Historic Park, the construction of the flag was described as such:

At a company meeting it was determined that we should raise a flag, and that it should be a bear en passant [a heraldry term signifying that the bear is walking toward the viewer's left], with one star. One of the ladies at the garrison gave us a piece of brown domestic, and Mrs. Captain John Sears gave us some strips of red flannel about 4 inches wide. The domestic was new, but the flannel was said to have been part of a petticoat worn by Mrs. Sears across the mountains…I took a pen, and with ink drew the outline of the bear and star upon the white cloth. Linseed oil and Venetian red were found in the garrison, and I painted the bear and star…Underneath the bear and star were printed with a pen the words 'California Republic' in Roman letters. In painting the words I first lined out the letters with a pen, leaving out the letter 'i' and putting 'c' where 'i' should have been, and afterwards the 'i' over the 'c'. It was made with ink, and we had nothing to remove the marks.

The bear on the first bear flag and other early bear flags more closely resembles the more common American black bear than a grizzly, seen in the lack of shoulder hump and narrower muzzle. Moreover, the first bear flag closely resembles the coat of arms of Bern, Switzerland, its capital city. The coat of arms displays a black bear walking toward the left with fierce claws and a protruding tongue. Switzerland was the home country of John Sutter, who established Sutter's Fort, in the area which would spawn the California Gold Rush and eventually become Sacramento, California's state capital.

The original Bear Flag and the republic it symbolized had a brief career, from about June 14 until July 9. On July 7, 1846, Commodore John Drake Sloat of the United States Navy's Pacific Squadron first raised the 28-star American flag at Monterey, the capital of Alta California, and claimed the territory for the United States.

Two days later, on July 9, 1846, Navy Lt. Joseph Warren Revere arrived in Sonoma and hauled down the Bear Flag, running up in its place the Stars and Stripes. The Bear Flag was given to young John E. Montgomery (son of Commander John B. Montgomery of the USS Portsmouth), who would later write in a letter to his mother "Cuffy came down growling"—"Cuffy" being his nickname for the bear on the flag.

The Bear Flag given to young Montgomery returned with the USS Portsmouth to the east coast of the U.S. in 1848, but in 1855 was returned to California. The flag was given to California's two senators John B. Weller and William M. Gwin. This flag was donated to the Society of California Pioneers on September 8, 1855, and was preserved at the Society's Pioneer Halls in San Francisco until it was destroyed on April 18, 1906, in the fires that followed the great San Francisco earthquake. Today, a replica hangs on display in the Sonoma Barracks, or El Presidio de Sonoma. There is also a statue in the plaza at Sonoma, California, commemorating the raising of the flag, the Bear Flag Monument.

During the secession crisis and the early part of the American Civil War in 1861, California was divided between supporters of the union and supporters of southern secession. Sympathizers of the south in Los Angeles County and San Bernardino County showed support for secession by flying the Bear Flag instead of the Stars and Stripes.

Digital reproduction of the Gillis flag

During the war to preserve the United States, Union soldiers protected the West against secessionists who ran up Confederate flags in many places, including above the California statehouse in Sacramento, then disappearing before they could be caught. The motto of the rebels was "The Constitution as it is, the union as it was." On July 4, 1861, during Independence Day celebrations in Sacramento, Democrat and veteran, Maj. J. P. Gillis celebrated the independence of the United States from Britain and the secession of the Confederacy by unfurling a flag based on the first Confederate flag, the Stars and Bars, but containing seventeen stars rather than the Confederate banner's seven, and marching down the street to the cheers of proslavery individuals. Unionist Jack Biderman denounced Gillis, tore the flag from his hands, and taunted secessionists to try to take the flag back. No one tried. Because Gillis' flag was seized by Jack Biderman, it is referred to either as the "Biderman Flag" or the "Gillis Flag."

The flag of the Governor of California

The flag of the governor of California consists of the seal of California centered on a field of azure. Like most U.S. governors' flags, there are four five-point stars at the corners of the field.

All content from Kiddle encyclopedia articles (including the article images and facts) can be freely used under Attribution-ShareAlike license, unless stated otherwise. Cite this article:
Flag of California Facts for Kids. Kiddle Encyclopedia.