The River Cocker is a river in the Lake District in North West England, in the county of Cumbria. Its source is at the head of the Buttermere valley. It flows north through Buttermere and then Crummock Water, through Lorton Vale, to the town of Cockermouth, where it joins the River Derwent. It is roughly 12 miles (19 km) long. The river takes its name from the Brythonic Celtic word kukrā, meaning 'the crooked one.' 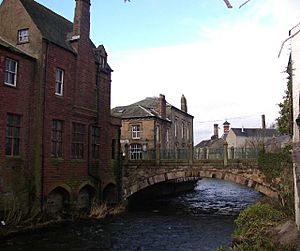 The small river came to national prominence in the 2009 Great Britain and Ireland floods. The county of Cumbria was the hardest hit area during the floods, when the River Cocker and River Derwent both burst their banks, covering the town of Cockermouth in as much as 8 feet (2.4 m) of water, causing extensive damage to houses, shops, workplaces as well as the home of Cockermouth Cricket Club.

All content from Kiddle encyclopedia articles (including the article images and facts) can be freely used under Attribution-ShareAlike license, unless stated otherwise. Cite this article:
River Cocker, Cumbria Facts for Kids. Kiddle Encyclopedia.