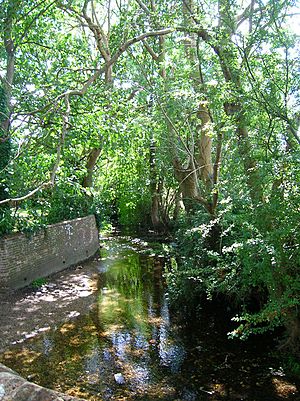 The River Ems is a much-sluiced, 6-mile (9.7 km) river of the far west of West Sussex which for its last 1.5 miles (2.4 km) delimits eastern Hampshire, before flowing into large, coastal Chichester Harbour. Its source is in Stoughton. Along the county-limits part its west bank is the old town portion of Emsworth which has a museum, hospital and is largely pre-1900-built buildings.

The Ems flows south west through Walderton as a broad-catchment winterbourne. It runs past:

All content from Kiddle encyclopedia articles (including the article images and facts) can be freely used under Attribution-ShareAlike license, unless stated otherwise. Cite this article:
River Ems (Chichester Harbour) Facts for Kids. Kiddle Encyclopedia.