Kids Encyclopedia Facts
This page is about the town in Hampshire. For the town in the U.S., see Emsworth, Pennsylvania. For the P.G. Wodehouse character, see Lord Emsworth.

Emsworth is a small town in Hampshire on the south coast of England, near the border of West Sussex. It lies at the north end of an arm of Chichester Harbour, a large and shallow inlet from the English Channel and is equidistant between Portsmouth and Chichester.

Emsworth has a population of approximately 10,000. The town has a basin for small yachts and fishing boats, which fills at high tide and can be emptied through a sluice at low tide. In geodemographic segmentation the town is the heart of the Emsworth (cross-county) built-up area, the remainder of which is Westbourne, Southbourne and Nutbourne. The area had a combined population of 18,777 in 2011, with a density of 30.5 people per hectare and shares two railway stations.

Emsworth began as a Saxon village. At first it was linked to the settlement of Warblington nearby. People from Emsworth worshipped at St Peter's Chapel or in the church at Warblington. Emsworth was not mentioned in the Domesday Book of 1086, as it was included with Warblington.

Emsworth grew to be larger and more important: in 1239 Emsworth was granted the right to hold a market, and there was also an annual fair In 1332 Emsworth (Empnesworth) was one of Hampshire's four Customs Ports. 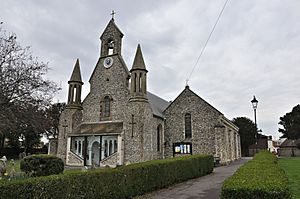 During the 18th and 19th centuries, Emsworth was still a port. Emsworth was known for shipbuilding, boat building and rope making. Grain from the area was ground into flour by tidal mills and transported by ship to places such as London and Portsmouth. Timber from the area was also exported in the 18th and 19th centuries. The River Ems, which is named after the town (not, as often believed, the town being named after the river), flows into the Slipper millpond. The mill itself is now used as offices. 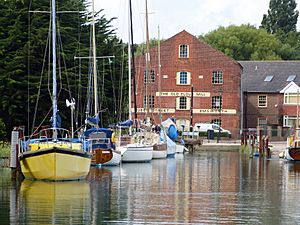 In the 19th century Emsworth had as many as 30 pubs and beer houses; today, only nine remain. Emsworth's once famous oyster industry went into decline in the early years of the 20th century. Recently, Emsworth's last remaining oyster boat, The Terror, was restored and is now sailing again.

At the beginning of the 19th century, Emsworth had a population of less than 1,200 but it was still considered a large village for the time. By the end of the 18th century, it became fashionable for wealthy people to spend the summer by the sea. In 1805 a bathing house was built where people could have a bath in seawater.

The parish Church of St James was built in 1840. Queen Victoria visited Emsworth in 1842, resulting in Queen Street and Victoria Road being named after her. In 1847 the London, Brighton and South Coast Railway (now the West Coastway Line) came to Emsworth, with a railway station built to serve the town. 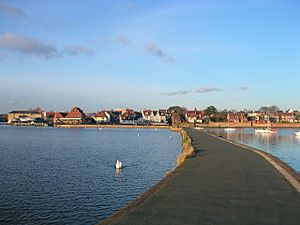 By 1901 the population of Emsworth was about 2,000. It grew rapidly during the 20th century to about 5,000 by the middle of the century. In 1906 construction began on the post office, with local cricketer George Wilder laying an inscribed brick. The renamed Emsworth Recreation Ground dates from 1909 and is the current home of Emsworth Cricket Club, which was founded in 1811. Cricket in Emsworth has been played at the same ground, Cold Harbour Lawn, since 1761.

In 1902 the Emsworth oyster industry went into rapid decline. This was after many of the guests at mayoral banquets in Southampton and Winchester became seriously ill and four died after consuming oysters. The infection was due to oysters sourced from Emsworth, as the oyster beds had been contaminated with raw sewage. Fishing oysters at Emsworth was subsequently halted until new sewers were dug, though the industry never completely recovered. 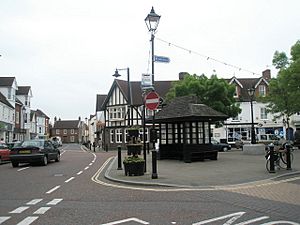 During the Second World War, nearby Thorney Island was used as a Royal Air Force station, playing a role in defence in the Battle of Britain. The north of Emsworth at this time was used for growing flowers and further north was woodland (today Hollybank Woods). In the run up to D-Day, the Canadian Army used these woods as one of their pre-invasion assembly points for men and material. Today the foundations of their barracks can still be seen. In the 1960s large parts of this area were developed with a mix of bungalow and terraced housing.

For a few years (2001 to 2007), Emsworth held a food festival. It was the largest event of its type in the UK, with more than 50,000 visitors in 2007. The festival was cancelled due to numerous complaints of disruption to residents and businesses in the proximity.

The harbour is now used almost exclusively for recreational sailing. The town has two sailing clubs, Emsworth Sailing Club (established in 1919) and Emsworth Slipper Sailing Club (in 1921). Both clubs organise a programme of racing and social events during the sailing season. In April 2014 Emsworth Sailing Club received national media coverage, after a car was driven into the clubhouse, causing a loud explosion and requiring 30 firefighters to extinguish the blaze.

Emsworth is twinned with Saint-Aubin-sur-Mer in Normandy, France

Emsworth railway station is on the West Coastway Line. It has services that run to Portsmouth, Southampton, Brighton and London Victoria.

Stagecoach South operates the number 700 bus, which runs between Brighton and Southsea.

All content from Kiddle encyclopedia articles (including the article images and facts) can be freely used under Attribution-ShareAlike license, unless stated otherwise. Cite this article:
Emsworth Facts for Kids. Kiddle Encyclopedia.