River Mill Hydroelectric Project, also known as River Mill Dam and Station M, is a hydroelectric dam and powerhouse in Clackamas County, Oregon, United States. It is just north of Estacada, Oregon, on the Clackamas River at river mile 23.5 (km 37.8).

The dam has been in continuous production of hydroelectric power since 1911, when its construction was funded by the Portland Railway, Light and Power Company. It was one of four related projects on the Clackamas River: the Oak Grove Hydroelectric Project (developed 1923–56), the North Fork dam (1958), and the Faraday Dam (1907–10), all upstream (south) of River Mill. All four are still owned and operated by the successor company, Portland General Electric. 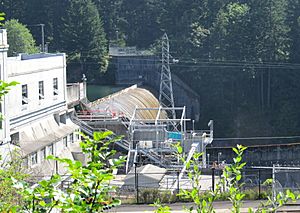 The principle designer of the original Mill Run Dam was the Norwegian immigrant Nils F. Ambursen (1876–1958). Based in Boston, his Ambursen Hydraulic Construction Company designed over a hundred dams in the United States from 1903 through 1917. Ambursen's patented concrete-slab-and-buttress dam design was a significant advance in dam design of this era. Mill Run is one of only three Ambursen-type dams built west of the Mississippi, and evidently the only one to survive.

The project is listed on the National Register of Historic Places, and in the Oregon Historic Sites Database of the Oregon State Historic Preservation Office. 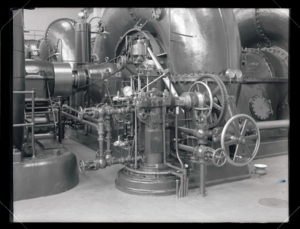 All content from Kiddle encyclopedia articles (including the article images and facts) can be freely used under Attribution-ShareAlike license, unless stated otherwise. Cite this article:
River Mill Hydroelectric Project Facts for Kids. Kiddle Encyclopedia.