Kids Encyclopedia Facts
Not to be confused with Rivière de la Ferme.

The rivière des Fermes (in English: Ladies River) is a tributary of the west bank of the Chaudière River which flows northward to empty onto the south bank of the St. Lawrence River. It flows in the administrative region of Chaudière-Appalaches, in Quebec, in Canada, in the Robert-Cliche Regional County Municipality (municipalities of Saint-Frédéric and Tring-Jonction) and La Nouvelle-Beauce Regional County Municipality (municipality of Saint-Joseph-des-Érables).

The main neighboring watersheds of the Fermes river are:

From its source, the Fermes river flows over 18.8 kilometres (11.7 mi) divided into the following segments: 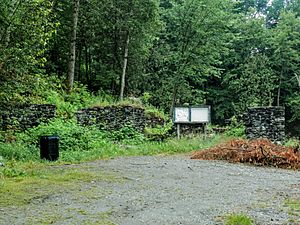 Site of the old seigneurial mill.

About a kilometer from its confluence, the course of the river crosses the rapids of important rapids. A mill had been erected at this place Lord Joseph de Fleury de La Gorgendière; the latter did not live in his seigneury of Beauce, preferring to live in his manor of Deschambault. All around is the site of the "Grandes Fermes", the local appellation attributed to the whole of the lord's own domain.

A farm road, extended by a Saint-Louis range to the limits of the seigneury, climbs the hill and allows you to reach the site of the waterfall and the foundations of the seigneurial mill. The latter was demolished in 1962. Then a campground was built on the site. The toponym "Rivière des Fermes" is often attested in documents since the end of XVIIIth Century and, on maps, at least since 1878.

The toponym "rivière des Fermes" was made official on December 5, 1968 at the Commission de toponymie du Québec.

All content from Kiddle encyclopedia articles (including the article images and facts) can be freely used under Attribution-ShareAlike license, unless stated otherwise. Cite this article:
Rivière des Fermes Facts for Kids. Kiddle Encyclopedia.