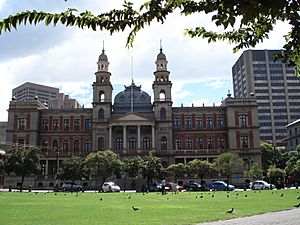 The Palace of Justice in Pretoria, site of the trial

The Rivonia Trial was a trial that took place in South Africa between 1963 and 1964. Ten leaders of the African National Congress were tried for 221 acts of sabotage designed to overthrow the apartheid system. This trial was held after the police raid on the MK base in Rivonia, where documents related to the 10 accused men were found. One of the men was the future President of South Africa, Nelson Mandela. After the trial, Mandela was taken to jail in Robben Island.

The chief prosecutor was Dr. Percy Yutar, deputy attorney-general of the Transvaal.

The presiding judge was Dr. Quartus de Wet, judge-president of the Transvaal.

Among the arrested were:

Most of the Rivonia defendants were to be convicted, and in turn sentenced to life imprisonment.

All content from Kiddle encyclopedia articles (including the article images and facts) can be freely used under Attribution-ShareAlike license, unless stated otherwise. Cite this article:
Rivonia Trial Facts for Kids. Kiddle Encyclopedia.