He is the younger brother of former NHL defenceman Scott Niedermayer (the two were teammates for four seasons) and cousin of defenceman Jason Strudwick. Born in Cassiar, British Columbia, he and his brother Scott grew up in Cranbrook.

Niedermayer was drafted fifth overall by the Florida Panthers in the 1993 NHL Entry Draft. At the time, he was playing for the Medicine Hat Tigers of the Western Hockey League (WHL). He began his NHL career immediately following his draft, without playing a game in the minors. During the 1995–96 season, he set career highs in goals, assists and points in the regular season. In the 1996 Stanley Cup playoffs, the Panthers went on an improbable playoff drive to the Stanley Cup Finals before being swept in four games by the Colorado Avalanche. Niedermayer was hurt by concussions in the next years and was never able to achieve the same level of scoring ability again. His NHL role soon turned into a defensive forward.

On July 23, 2001, Niedermayer was traded to the Calgary Flames (alongside a draft pick) in exchange for Valeri Bure and Jason Wiemer. At the 2003 NHL trade deadline, he was sent to the Mighty Ducks of Anaheim. That same year, he helped the Anaheim Ducks make an improbable run to the Stanley Cup Finals, his second such run. But again, Niedermayer's team lost, although this time it was in seven games to his brother's team, the New Jersey Devils. He and Scott became the first set of brothers to play against each other in the Stanley Cup Final since Ken and Terry Reardon did it in 1946. In the summer of 2005, Rob's brother Scott was signed by the Mighty Ducks, and for the first time in their NHL careers, the two brothers were playing on the same team.

He and his brother Scott (by this point captain of the Ducks, with Rob as an alternate) won the Stanley Cup together as members of the Anaheim Ducks after defeating the Ottawa Senators four games to one in 2007, becoming the first brothers to win the Stanley Cup together since Duane and Brent Sutter accomplished the feat twice with the New York Islanders in 1982 and 1983. After Scott took the first lap around the ice with the Stanley Cup, he handed it to Rob. This was a break with Stanley Cup tradition; normally, the alternate captain who has waited longest to win the Cup (in the 2006–07 Ducks' case, Chris Pronger and Teemu Selänne) takes the next lap after the captain takes his lap. 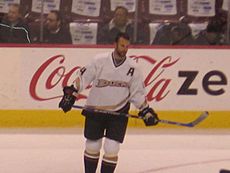 Rob Niedermayer warming up during the 2007 playoffs

After becoming a free agent following the 2011 season, Niedermayer signed with HC Lugano of the Swiss National League A.

On July 16, 2006, Niedermayer married longtime girlfriend Jessica Bentall, daughter of Barney Bentall, whom he had been dating since March 2001. Together, they have two daughters. Niedermayer was a minority owner of major junior club the Kootenay Ice in the WHL for 18 years before selling his stake (along with brother Scott) to the Chynoweth family after the 2015–16 season.

All content from Kiddle encyclopedia articles (including the article images and facts) can be freely used under Attribution-ShareAlike license, unless stated otherwise. Cite this article:
Rob Niedermayer Facts for Kids. Kiddle Encyclopedia.