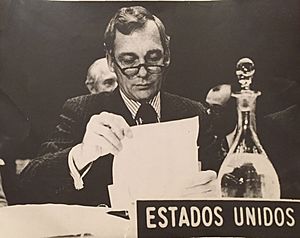 White was born in Melrose, Massachusetts. He served in the U.S. Navy from 1944 to 1946. He was married to Mary-Anne White and had five grown children.

White died on January 13, 2015 in Arlington, Virginia from prostate and bladder cancer, aged 88.

All content from Kiddle encyclopedia articles (including the article images and facts) can be freely used under Attribution-ShareAlike license, unless stated otherwise. Cite this article:
Robert White (ambassador) Facts for Kids. Kiddle Encyclopedia.