The Robert and Anne Dickey House, also referred to as the Robert Dickey House or by its address 67 Greenwich Street, is a Federal-style building in the Financial District of Manhattan in New York City. The site is bounded by Edgar Street to the south, Greenwich Street to the west, and Trinity Place to the east. It is named after Robert Dickey, a 19th-century New York merchant, and his wife Anne, who both resided in the house. Erected circa 1810, it is one of the few remaining Federal-style buildings in the city, and was designated a New York City Landmark in 2005. Currently in disrepair, the building is slated for renovation and conversion into a school as part of the construction of the adjacent 77 Greenwich Street.

The Dickey House is directly served by several New York City Subway stops. The Rector Street station of the IRT Broadway–Seventh Avenue Line (1 train) is located under Greenwich Street, and a station of the same name is located on the BMT Broadway Line (N, ​R, and ​W train) under Trinity Place. The Wall Street and Bowling Green stations of the IRT Lexington Avenue Line (4 and ​5 train) are located under Broadway east of the site. The M55 local bus serves the site on Trinity Place (northbound) and Broadway (southbound). Numerous express bus routes to/from outer boroughs also operate in the area. The Staten Island Ferry Whitehall Terminal is located south of the site, connected by the subway or bus.

The building was designed by an unknown architect in the Federal style. The design has been erroneously attributed to Pierre Charles L'Enfant. As originally constructed the house was 3 1⁄2 stories tall, with the top 1⁄2 story occupied by a peaked roof. An 1872 alteration by architect Detlef Lienau replaced the peaked roof with a fourth story capped by a flat roof with a metal cornice. The front face of the building on Greenwich Street is flat and four-windows wide. The bottom floor is utilized for retail space.

As of 2011, the Dickey House is one of only seven surviving pre-1810 houses located south of Chambers Street. The building, however, has been in disrepair since the turn of the 21st century. Currently, the house is hollowed out, with its roof and chimney removed to facilitate construction of 77 Greenwich, after which the building will be restored in the original style. As a result, only three outer faces (Greenwich, Edgar, Trinity) currently make up the building, while the construction and restoration are ongoing.

The rear face of the building on Trinity Street is five bays wide. It features an "elliptical" or "bow-shaped" facade, which occupies the northernmost three windows and extends outward towards the street. This was an original design feature, and the 1872 remodeling maintained this element for the fourth floor. The elliptical design has been compared to that of buildings in Boston. The ellipse originally faced a garden on the property.

The south facade on Edgar Street contains a chimney and no windows. It was originally adjacent to another building, until that building was demolished and Edgar Street was relocated north to front the building during the construction of the Battery Tunnel in the 1940s. Windows may have existed on this face in the past. The south face was later used as a billboard. The outer facade of the house consists of red brick, but the front (Greenwich) and rear (Trinity) faces have been painted gray. A one-story "commercial addition" was constructed in 1922 on the Trinity Place side of the building. This addition was most recently used as a tavern.

As part of the construction of 77 Greenwich Street, the Dickey House will be renovated and converted for use as a public elementary school building. The school will occupy both the house and portions of the lower floors of the tower. The exterior will be restored to its 19th-century condition. The 1922-built retail addition, considered non-historical, will be removed to create a new entrance to the building. Part of the new tower will cantilever over the house. The project was designed by FXFOWLE. The house will be renovated by the New York City School Construction Authority. 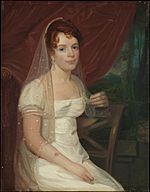 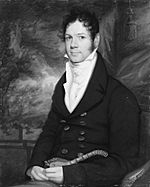 Paintings of Anne Dickey (left) and Robert Dickey circa 1810, by John Wesley Jarvis

Robert Dickey and Anne Dickey (née Brown) were both born in what is now Northern Ireland, and later emigrated to the United States. Robert Dickey arrived in the U.S. in 1798. The two married in Baltimore, Maryland in 1807. Robert Dickey was a spice merchant, whose fortunes put him among the wealthiest men in New York City at the time.

The lower ends of Greenwich Street and Trinity Place were created circa 1790, when a "bluff" created by the Hudson River tides was leveled and filled in order to be developed. 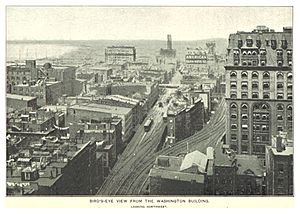 The house was transferred to Peter Schermerhorn (brother of Abraham Schermerhorn) in 1823, and the Schermerhorn family owned the building through the 19th century. During this time, the house was rented out to prominent New Yorkers. These included William Bayard Jr., Nicholas Low, and Ezra Ludlow (father of William H. Ludlow). It also served as the French Consulate building from 1830 to 1831. By the 1840s, it became a boarding house.

In the late 1860s, construction began on the Ninth Avenue Elevated railroad along Greenwich Street in front of the house. The elevated line opened in 1868. Shortly afterwards, the Sixth Avenue Line was erected along Trinity Place (then called New Church Street), with the two lines merging at Morris Street. This meant that both the front and rear faces of the Dickey House were obstructed by elevated tracks. In 1872, Detlef Lienau was contracted to remodel the house, removing the hipped roof and adding the building's fourth floor. By this time, the building was used as a tenement, with the original upper class residents of the neighborhood having relocated uptown and immigrants taking their place. An 1890 police census reported 57 tenants of Irish descent occupying the house.

The house was sold in 1919 to Rose A. McGuigan. One year later, McGuigan (also spelled "McGuigman") filed plans to convert the house and the adjacent 65 Greenwich Street property into a six-story office building. Around this time, the surrounding neighborhood west of Greenwich Street developed into an Arab immigrant community known as Little Syria. In 1922, the one-story shop extension was constructed on Trinity Place. 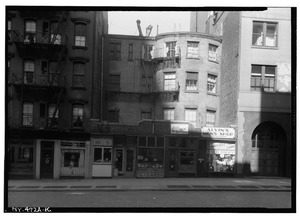 The Dickey House looking from Trinity Place in 1940. Note the adjacent buildings on both sides, and the one-story shops in front of the house.

The Sixth and Ninth Avenue elevated lines were closed in 1938 and 1940 respectively, and dismantled in the 1940s. During the construction of the Brooklyn–Battery Tunnel in that decade, numerous buildings in the neighborhood were demolished. This included many on Greenwich Street, and most of Little Syria. The Dickey House, however, remained, with Edgar Street moved north to the south face of the house. Because of this, the house would later be described as a "Robert Moses survivor".

In 1960, the Dickey House was purchased by brothers-in-law Irving Schachter and Eli Goldhagen. At this time, the building was used by a paper company.

The house was first nominated for possible landmark status in 1967. On February 11, 1991, the New York State Historic Preservation Office identified the building as a potential state or national landmark. By the turn of the 21st century, the house was in a state of disrepair. Following the September 11 attacks, the building was vacated. On June 28, 2005, the house was designated as a city landmark by the New York City Landmarks Preservation Commission. The designation was opposed by Martha Schachter Schessel and Harry Schessel, who were the owners of the house and the descendants of Irving Schachter. They wanted the building to be demolished. The family claimed restoration costs would run to $6 million.

In 2008, it was revealed that the Syms Corporation, who owned and operated a store in the adjacent building (42 Trinity Place), planned to develop a multi-story tower on the shop site. To do this, they would need to purchase air rights from adjacent buildings including the Dickey House. In May 2008, Syms purchased the Dickey House. In November 2011, Syms filed for bankruptcy and closed all of its locations in January 2012.

Beginning in late 2014, Syms (now reorganized as Trinity Place Holdings) planned to construct a residential and retail tower on the former store. By 2016, the project was named 77 Greenwich Street. The plan would incorporate the Dickey House into the development, renovating the house for use as an elementary school. Demolition of the Syms building was complete in October 2017. At this time, the chimney and north face of 67 Greenwich were removed, and metal support beams were installed to maintain the house's structural integrity.

All content from Kiddle encyclopedia articles (including the article images and facts) can be freely used under Attribution-ShareAlike license, unless stated otherwise. Cite this article:
Robert and Anne Dickey House Facts for Kids. Kiddle Encyclopedia.