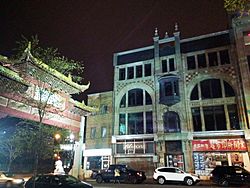 The Robillard Block (French: Édifice Robillard) once located at 974 boul. St. Laurent, was a landmark building in Montreal, Quebec, Canada, situated in Montreal's Chinatown on the corner of Viger Street and Saint Laurent Boulevard. On 17 November 2016, the building was destroyed by fire. 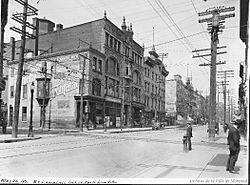 Constructed in the Neo-Renaissance style, the structure was built in 1879, and transformed into a hotel in 1890. In 1891, it housed the Gaiety Museum and Theatorium, a popular Victorian-era curios showcase. In May 1896, it started housing the Palace Theatre, and on June 27 showed the first movies in North America, making it the first cinema in North America. The cinema system used a projector system developed by the Lumiere brothers, the cinématographe, and had a screen the size of a towel. The first films shown were of a train, a ship, a cavalry charge, and demolishing a wall. The show continued for two months, and were presented by Louis Minier and his assistant Louis Pupier. In September 1896, continuous showings with the cinematographe lumiere started.

All content from Kiddle encyclopedia articles (including the article images and facts) can be freely used under Attribution-ShareAlike license, unless stated otherwise. Cite this article:
Robillard Block Facts for Kids. Kiddle Encyclopedia.