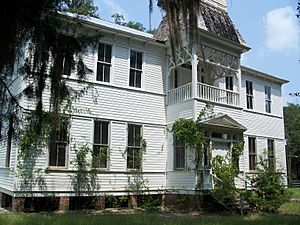 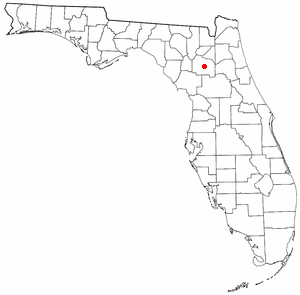 Rochelle is an unincorporated community in Alachua County, Florida, United States. It was found in the 1830s on a former native settlement and mission site. Rochelle was at a junction on the Florida Southern Railway (later, the Plant System), with lines running to Gainesville, Ocala and Palatka. Originally known as Perry, or Perry Junction, the community was renamed Gruelle in 1881 after N. R. Gruelle, General Manager of the Florida Southern Railway (the station was still listed as Perry on the first timetable issued by the railway after it reached Gainesville in 1881). In 1884, the community name was changed again, to Rochelle, after the parents of Governor Perry's wife. The town was described as having a hotel, two or three stores, a sawmill, and an express-office in 1883, and a population of 150 in 1884. Citrus growing became important in the area, and in 1885 the town had two sawmills, two churches, two schools (Rochelle School, also known as the Martha Perry Institute, for whites, and a school for blacks), and a couple dozen houses. The Great Freeze of 1894–1895 destroyed the citrus industry in the area, and the town declined afterwards. The Rochelle School closed in 1935.

All content from Kiddle encyclopedia articles (including the article images and facts) can be freely used under Attribution-ShareAlike license, unless stated otherwise. Cite this article:
Rochelle, Florida Facts for Kids. Kiddle Encyclopedia.