Kids Encyclopedia Facts
Not to be confused with Rockingham Naval Memorial Park.

The Rockingham War Memorial is a military memorial in the City of Rockingham, Western Australia, dedicated to what is now the Australian Defence Force. 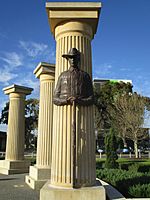 Bronze soldier at the memorial

The centre piece of the war memorial was originally located on the opposite side of Flinders Lane but relocated to its current location in 2007, when the area was redeveloped.

The memorials main feature are its thirteen classical styled columns, one for each major conflict Australia participated in. The 5.5 metre tall columns are arranged in a circle of a diameter of 30 metres. A fourteenth column socket has been left empty to commemorate Australian soldiers missing in action. The three branches of the Australian Defence Force, Army, Air Force and Navy, are represented by a QF 25-pounder field gun, a propeller and an anchor. The entrance to the memorial is guarded by two bronze soldiers, created by Perth sculptor Andrew Kay. Each weights 160 kilograms and is double the human size.

In 2015, a memorial was added to commemorate the centenary of World War One. It displays a Roll of Honour with sixteen names listed of those from the district who served during the war.

All content from Kiddle encyclopedia articles (including the article images and facts) can be freely used under Attribution-ShareAlike license, unless stated otherwise. Cite this article:
Rockingham War Memorial Facts for Kids. Kiddle Encyclopedia.