Rosedale Park is a historic district located in Detroit, Michigan. It is roughly bounded by Lyndon, Outer Drive, Grand River Avenue, Southfield Freeway, Glastonbury Avenue, Lyndon Street and Westwood Drive. It was listed on the National Register of Historic Places in 2006. The Rosedale Park district has the largest number of individual properties of any district nominated to the National Register of Historic Places in Michigan, with 1533.

The district contains primarily brick houses, and was largely developed from the late 1920s through the 1940s.

Interest in the new subdivision was immediate, and in 1917, the Rosedale Park Land Development Company platted an addition to the original area. However, the actual construction in the neighborhood was slow—from 1917 until the end of World War I, only 15 houses had been constructed. However, construction soon blossomed, and in 1921 a third addition was platted. The city of Detroit annexed the subdivision in 1926, bringing water and sewer to the neighborhood and making the area more attractive.

Compared with other contemporary neighborhoods, such as Palmer Woods and the Grosse Pointes, Rosedale Park has more modest house and lot sizes reflecting the solidly middle- and upper-middle class status of the original homeowners. Many of these original homeowners were professionals, such as doctors and dentists, and accountants, or had white-collar jobs in the booming automobile industry.

With the onset of the Great Depression in 1929, building in the area slowed, but in 1934, as the FHA made credit more available, construction again resumed, and another growth spurt in the neighborhood occurred in the late 1930s and early 1940s. By the 1950s, there was a house on nearly every lot in the neighborhood. In the later part of the century, as the population in Detroit declined, Rosedale Park has remained a desirable neighborhood due to its high grade housing stock, charming setting and active neighborhood association. 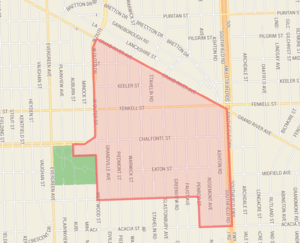 The Rosedale Park Historic District is residential in character. Primary streets run north-south, and major stone piers mark the primary entrances into the neighborhood. Traffic islands are placed in the center of many of the streets. Oak and maple trees, some planted in the 1910s and 1920s, line the streets.

Private architects were only rarely engaged in Rosedale Park construction. Instead, buyers gained inspiration from mass-produced pattern books and house plans, or worked with construction companies to choose plans from their standard offerings. Between 1917 and 1955, houses were built in a multitude of styles, including English Tudor Revival, Arts and Crafts, Bungalow, Colonial Revival, Dutch Colonial, American Foursquare, Prairie, French Renaissance, Ranch, Garrison Colonial, Cape Cod and International style. However, an English country esthetic seems to have been encouraged (although not mandated) by the developers, and this seems to have influenced the renaming of many of the subdivision's streets, such as Glastonbury and Warwick, to names reflective of Merry Old England. Later houses built in the less prosperous late 1930s and early 1940s are less elaborate Colonial and Ranch styles, but even these tend to have Tudor Revival elements.

The current Gompers Elementary-Middle School, serving Grades PreK-8, opened in 2011. The two story, Leadership in Energy and Environmental Design (LEED)-certified facility replaced the Gompers, Harding, and Vetal schools and was built on the Harding site for $21.4 million. It has an elementary wing and a middle school wing. The central administration suite, gymnasium, and multi-purpose room are between the two wings.

All content from Kiddle encyclopedia articles (including the article images and facts) can be freely used under Attribution-ShareAlike license, unless stated otherwise. Cite this article:
Rosedale Park, Detroit Facts for Kids. Kiddle Encyclopedia.