Roseland Plantation is a historic plantation complex site in Faunsdale, Alabama. The site is situated on a low hill at the end of a long driveway on the overgrown estate. It was added to the National Register of Historic Places on January 20, 1994 as a part of the Plantation Houses of the Alabama Canebrake and Their Associated Outbuildings Multiple Property Submission.

The plantation house at Roseland Plantation began as a dogtrot house in 1835. A large two-story Greek Revival-style frame addition was added to the front of the dogtrot in the mid-1850s. The former front porch of the dogtrot became a cross-hall and the breezeway of the dogtrot was extended into a very long center-hall in the new construction. The upper floor was accessed from the central hallway via a reverse staircase. 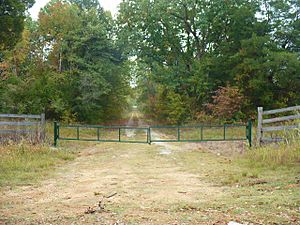 Entrance drive to the Roseland site.

The main house and most of the outbuildings have been demolished by neglect, but the largely undisturbed site remains important for archaeological reasons. A dairy cooler and the original log kitchen do remain at the site. A survey done in 1993, prior to its nomination to the National Register, indicated that the main house was in ruins with only a few walls remaining.

At the time of the survey a small Greek Revival plantation office had already been removed to another location. Known as the "apothecary", it was used for dispensing medicine to the plantation's slaves. The property owners gave it to the Sturdivant Museum Association and it was moved to the grounds of Sturdivant Hall in Selma in order to ensure its preservation. A large seven-seat privy at Roseland, dating from the 1850s, was also donated to the Sturdivant Museum Association in 1979, but was not relocated to Sturdivant Hall until 2005.

All content from Kiddle encyclopedia articles (including the article images and facts) can be freely used under Attribution-ShareAlike license, unless stated otherwise. Cite this article:
Roseland Plantation Facts for Kids. Kiddle Encyclopedia.