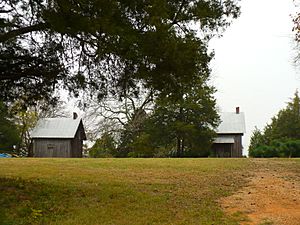 A post office called Faunsdale has been in operation since 1841. The town was named for nearby Faunsdale Plantation, founded in the 1830s by Messrs Pearson and Henry Augustine Tayloe-local land agent for his brothers Benjamin Ogle Tayloe, William Henry Tayloe, Edward Thornton Tayloe and George Plater Tayloe "considered the most important pioneer cotton planters of the Canebrake, as to the extent of their enterprise there." Faunsdale was incorporated as a town in 1907.

Every spring the town sponsors the annual Faunsdale Crawfish Festival, serving authentic Southern cooking on the street, with music and dancing. The same week, the bi-annual Faunsdale Biker Rally is within walking distance. It is an adult-only event, with bikers from all over the state in attendance.

There were 34 households out of which 41.2% had children under the age of 18 living with them, 64.7% were married couples living together, 8.8% had a female householder with no husband present, and 26.5% were non-families. 20.6% of all households were made up of individuals and 8.8% had someone living alone who was 65 years of age or older. The average household size was 2.56 and the average family size was 3.04.

All content from Kiddle encyclopedia articles (including the article images and facts) can be freely used under Attribution-ShareAlike license, unless stated otherwise. Cite this article:
Faunsdale, Alabama Facts for Kids. Kiddle Encyclopedia.