Marengo County is a county of the U.S. state of Alabama. As of the 2010 census, the population was 21,027. The largest city is Demopolis and the county seat is Linden. It is named in honor of the battlefield of the site of Battle of Marengo near Turin, Italy, where the Napoleon Bonaparte defeated the Austrians on June 14, 1800.

Marengo County was created by the Alabama Territorial legislature on February 6, 1818, from land acquired from the Choctaw Indians by the Treaty of Fort St. Stephens on October 24, 1816. The name of the county commemorates Napoleon's victory at the Battle of Marengo over the Austrian armies on June 14, 1800. This name was chosen in honor of the first European-American settlers, Bonapartists exiled from France after Napoleon's downfall, who in 1817 settled the area around Demopolis. They were trying to develop a Vine and Olive Colony.

The county seat was originally known as the Town of Marengo, but in 1823 the name was changed to Linden. Linden is a shortened version of Hohenlinden, scene of the Battle of Hohenlinden, a French victory in Bavaria on December 3, 1800 during Napoleon's campaign. County courthouse fires occurred in 1848 and 1965, but most of the courthouse records were in a vault and largely saved in both instances. 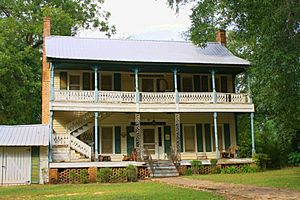 Barney's Upper Place, an I-house in Putnam that was built in 1833.

Situated in Alabama's Black Belt and having a naturally rich soil, the county was developed by planters for numerous cotton plantations, dependent on the labor of a large number of slaves. The population was majority black, and overwhelmingly enslaved, decades before the American Civil War. In 1860 the population consisted of 24,409 slaves, 6761 free whites (including 944 slave owners), and one "free person of color," for a total combined population of 31,171. At this time there were 778 plantations and farms in the county.

Demopolis was home to the fourth-oldest Jewish congregation in Alabama, B'nai Jeshurun. It was established in 1858. After the American Civil War, the economy continued to be based on agriculture. In the transition to free labor, many freedmen turned to sharecropping as a way to establish some independence. They did not want to work in owner-controlled field gangs.

The population began to diminish rapidly after World War II. People left the farms for manufacturing jobs elsewhere, particularly with the wartime buildup of the defense industry on the West Coast. The movement of blacks out of Mississippi and other parts of the Deep South was considered part of their Great Migration, by which 5 million African Americans left the South from 1940 to 1970.

The former cotton fields were gradually converted to other uses. Some were used for pastures for cattle and horses, others for woodlands for timber, and others developed as commercial catfish ponds for farming grain-fed catfish. Beginning in the 1960s industry began to move into the area; and the work force started to work in paper mills, lumber mills, and chemical plants. 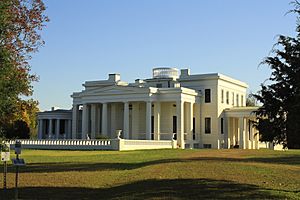 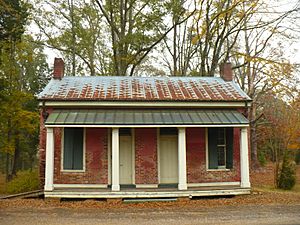 Dayton Town Hall (built 1858) in Dayton. On the Alabama Register of Landmarks and Heritage.

Marengo County is home to the Alabama Rural Heritage Center and Chickasaw State Park. The Tombigbee River and Black Warrior River form portions of the western and northern county borders and provide recreational opportunities. Marengo County has 28 sites listed on the National Register of Historic Places, one of which is also a National Historic Landmark. Additionally, 19 sites are listed on the Alabama Register of Landmarks and Heritage. 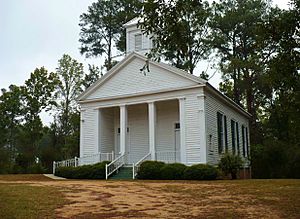 Jefferson Methodist Church (built 1856) in Jefferson. On the National Register of Historic Places as part of the Jefferson Historic District. 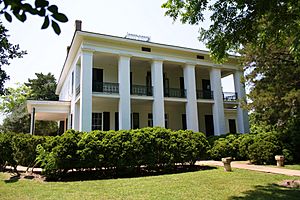 Lyon Hall (built 1853) in Demopolis. On the National Register of Historic Places.

All content from Kiddle encyclopedia articles (including the article images and facts) can be freely used under Attribution-ShareAlike license, unless stated otherwise. Cite this article:
Marengo County, Alabama Facts for Kids. Kiddle Encyclopedia.