The need for such a facility was first recognised in 1922, by Vice Admiral Sir William Creswell who suggested the building of a museum to permanently display the Australian Navy's already rich and unique heritage. Since then, there have been several attempts to establish an international-standard naval museum.

The origins of the RANHC date from 2001, when the then Chief of the Navy commissioned a Naval Heritage Management Study to examine in detail how the RAN's past might best be used to support the present Navy's goals. One of the most important recommendations was the creation of a facility for the public display of the Naval Heritage Collection (NHC). Once approval for funding was received, a RANHC Project Board was formed and the project began on 24 May 2004. The NHC contains more than 250,000 individual items, and the mission of the RANHC is to display those objects of museum standard to the public, and through these displays capture something of the Australian naval experience.

The Professions of Navy

This is a large thematic display focusing on how the Navy's people have 'done the job' at sea over the years. Branches and categories past and present are used to explain how the naval profession has changed and developed.

This exhibit features a unique interactive display a fully operational submarine attack periscope has been installed to allow visitors an unusual view of Sydney Harbour.

A specific display illustrating how the Navy has developed and applied technology to the sea-fighting environment. It includes precision instruments for navigation and gunnery, in addition to examples of naval ordnance ranging from shells and torpedoes to modern guided missiles.

The Battle of Sydney

This centres on the fin and control centre from one of the Japanese midget submarines that attacked Sydney Harbour on the night of 31 May-1 June 1942, and also includes the Boom Boat belonging to the Maritime Services Board that first raised the alarm. The display is supported by an interactive audiovisual presentation. 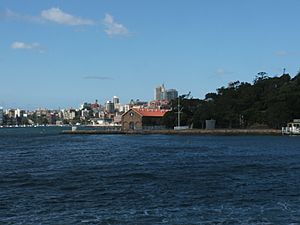 The RAN Heritage Centre building, at the northern end of Garden Island

In Which We Serve

This is a large chronological display of items that tell the stories of famous Australian ships and their battles. Artefacts are included from the colonial era, the First and Second World Wars, the Cold War and operations in the Persian Gulf.

The 1913 Boatshed has been dedicated as the display gallery for artefacts related to small boats and Australian dockyards, particularly Garden Island.

A Sailors Life For Me

This main exhibition display uses the entire mezzanine level of the workshop building, and provides visitors with an introduction to a sailor's life at sea. The display includes a mock-up of a World War II-era mess deck, as well as artefacts highlighting naval traditions and pastimes.

This is a mock-up of a Battle-class destroyer's open bridge, and is one of the major interactive displays in the centre. Using original equipment from 50 years ago, the Bridge is aimed at helping visitors acquire some experience of what takes place on a warship's bridge at sea.

All content from Kiddle encyclopedia articles (including the article images and facts) can be freely used under Attribution-ShareAlike license, unless stated otherwise. Cite this article:
Royal Australian Navy Heritage Centre Facts for Kids. Kiddle Encyclopedia.