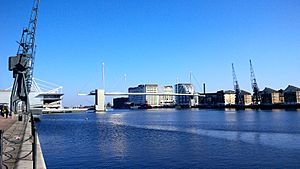 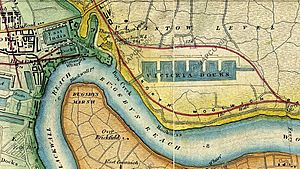 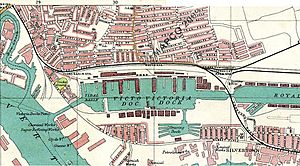 The Royal Victoria Docks are 14 kilometres (8.7 mi) from London Bridge, and 36 kilometres (22 mi) from Gravesend, and were designed and engineered by George Parker Bidder. Although the structure was in place in the year 1850, it was opened in 1855 on a previously uninhabited area of the Plaistow Marshes, it was the first of the Royal Docks and the first London dock to be designed specifically to accommodate large steam ships. It was also the first to use hydraulic power to operate its machinery and the first to be connected to the national railway network via the Eastern Counties and Thames Junction Railway section of what is now the North London Line. It was initially known as "Victoria Dock"; the prefix "Royal" was granted in 1880.

The dock was connected to the national rail network via a line which ran between Canning Town and North Woolwich. When the Royal Dock was first built the railway cut along the docks; to correct this a swingbridge over the entrance to the dock was built. This however slowed down journey time, and so a new line was built in 1855 to take the route around the north side of the dock to Silvertown, and a station at Custom House opened where it re-connected with the original line. The older southern line was kept to serve local factories, where it was known as the Silvertown Tramway.

The Royal Victoria Dock consisted of a main dock and a basin to the west, providing an entrance to the Thames on the western side of the complex. The dock was deeply indented with four solid piers, each 152 m long by 43 m wide, on which were constructed two-storey warehouses. Other warehouses, granaries, shed and storage buildings surrounded the dock, which had a total of 3.6 km of quays.

The dock was an immediate commercial success, as it could easily accommodate all but the very largest steamships. By 1860, it was already taking over 850,000 tons of shipping a year – double that of the London Docks, four times that of St Katharine Docks and 70% more than the West India Dock and East India Docks combined. It was badly damaged by German bombing in World War II but experienced a resurgence in trade following the war. However, from the 1960s onwards, the Royal Victoria experienced a steady decline – as did all of London's other docks – as the shipping industry adopted containerisation, which effectively moved traffic downstream to Tilbury. It finally closed to commercial traffic along with the other Royal Docks in 1980. 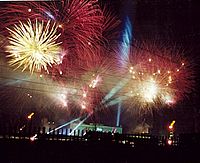 The dock during Jean Michel Jarre's Destination Docklands concert. A green projection can be seen on the facade of Spillers' Millennium Mills

In 1988, the then-dilapidated site was chosen by French electronic musician Jean Michel Jarre as the site for one of his signature large-scale concerts, eventually titled Destination Docklands. The area also inspired him to write the album Revolutions specifically for the event.

The show was intended to show a history of the area, with tracks dedicated to the industrial revolution, swinging sixties (achieved via a guest appearance by Hank Marvin), and future regeneration of the area. The concert's scale was larger than any seen in the UK before or since, and used vast numbers of fireworks, World War II searchlights, and used entire buildings as giant projection screens throughout the show. The majority of the audience watched from disused land on what is now the site of the ExCeL Exhibition Centre.

Originally planned as a one-off event, it was scheduled for 24 September 1988, but Jarre and his crew had to battle constantly with Newham Council and London Fire Brigade over logistical and safety concerns. Although the organisers publicly sought other venues in the meantime, a compromise was reached in which the event was split into two concerts to spread the crowds over two nights. These concerts went ahead on 8 and 9 October 1988. Weather throughout the buildup to the event was extremely rainy, and while the first concert narrowly avoided the downpours, much of the second took place in heavy rain.

The floating stage was specially-built, and made up of several barges shipped in from the north of England and welded together to create what Jarre termed his "battleship". The show attracted an estimated live audience of 200,000, not including those in parks surrounding the venue listening to the concert on a simultaneous broadcast on BBC Radio 1.

The concert programme featured drawings of the redevelopment works due to take place in the years after the concerts, as did some of the projections on the building facades.

A VHS video of the event was released, directed by Mike Mansfield. This has yet to be released on DVD. 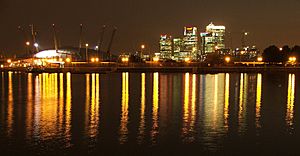 The O2 and Canary Wharf from the Royal Victoria Dock

The Royal Victoria Dock has experienced major redevelopment under the London Docklands Development Corporation. The dock itself still exists and is accessible to ships, although its western entrance has been filled in and it is now used chiefly for watersports. Its transport links have been greatly improved with new roads and Docklands Light Railway lines running along both its north and south side.

Most of the original warehouses have been demolished but the historic 19th-century K-S and W Warehouses (both listed buildings) have survived.

The dock is dominated by the ExCeL Exhibition Centre, constructed on the north quayside and opened in November 2000, and by the adjacent high level Royal Victoria Dock Bridge. The waterside location of ExCel is used to its advantage when it hosts the annual London Boat Show, with visiting vessels moored alongside the exhibition centre.

On the south side of the Dock is Britannia Village. The award-winning development, which included the high level footbridge, was commissioned by LDDC and carried out by Wimpey Homes, the Peabody Trust and the East Thames Housing Group between 1994 and 2000. Phase II of the project was left to the LDDC's successors. This was a development around the Pontoon Dock to include a village centre with mixed development of business, retail and leisure facilities and up to 700 new homes.

Now the responsibility of the Greater London Authority, this development is now known as Silvertown Quays and includes proposals to refurbish the remaining Millennium Mills along the waterfront for new uses and an aquarium. Britannia Village has its own Community Foundation.

On 15 August 2009, the dock hosted the inaugural Great London Swim, a mass participation open water swim over a one-mile distance. The event has been held annually since then but on the first weekend in July.

All content from Kiddle encyclopedia articles (including the article images and facts) can be freely used under Attribution-ShareAlike license, unless stated otherwise. Cite this article:
Royal Victoria Dock Facts for Kids. Kiddle Encyclopedia.