The Rufus M. Rose House is a late Victorian, Queen Anne style house located in the SoNo district of Atlanta, Georgia. Occupying a narrow lot on Peachtree Street, one and half blocks south of North Avenue, the house was built in 1901 for Dr. Rufus Mathewson Rose. The architect was Emil Charles Seiz (1873-1940), who designed many residential and commercial structures in the city, including the 1924 Massellton Apartments on Ponce de Leon Avenue.

The house is an extremely rare example of a nineteenth-century town house built for one of Atlanta's wealthy citizens. Its red-brick exterior consists of bayed and multi-gabled facades interspersed with numerous window shapes and sizes, and numerous fireplaces. The original slate roof and front porch have been lost.

Additionally, the property has carved, marble steps that originally ascended directly from the sidewalk on Peachtree Street up to the front porch. The home's tiny yard is the "singular survivor from Peachtree's residential heyday."

Rose, a former druggist and Civil War doctor who moved to Atlanta in 1867, was the founder of the R. M. Rose Co. Distillery (Mountain Spring Distillery), located in the Atlanta suburb of Vinings, as well as the owner of a large real estate business known as the Rose Investment Company. The Rose family lived in this home until 1921. 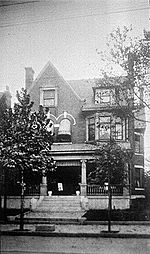 Rufus M. Rose House in 1903. Notice the mounting block at the curb.

In 1945, James H. Elliot, Sr., bought the house and used it as an antique store and museum, which he named J.H. Elliot's Antiques and the Atlanta Museum. Open to the public, the museum contained furniture belonging to Margaret Mitchell, personal items of Bobby Jones, Ethiopian Emperor Haile Selassie's throne, a Japanese Zero war plane and many other notable items. After more than 50 years, the store and museum closed in 1998.

From 1999 to 2001, the house served as the headquarters for the Atlanta Preservation Center until it moved into L. P. Grant's antebellum mansion in Atlanta's Grant Park neighborhood.

While the house is listed on the National Register of Historic Places (1977) and is designated as a Landmark Building Exterior (1989) by the City of Atlanta, it currently is vacant and endangered due to neglect.

The house was last sold for a price of $309,750 on August 24, 2011 to an individual by the name of Gholam Bakhtiari at an auction held by the real estate firm Williams & Williams. 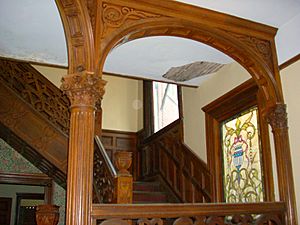 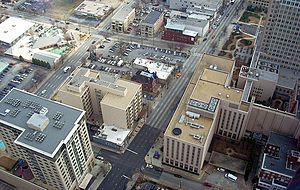 Aerial view of Rufus M. Rose House. The house is almost in the center of the photo with blue tarps hanging off its roof - just down and to the left of the orange taxi. Emory University Hospital Midtown is to the right. Photo taken from Bank of America Plaza.

All content from Kiddle encyclopedia articles (including the article images and facts) can be freely used under Attribution-ShareAlike license, unless stated otherwise. Cite this article:
Rufus M. Rose House Facts for Kids. Kiddle Encyclopedia.