Margaret Rumer Godden OBE (10 December 1907 – 8 November 1998) was an English author of more than 60 fiction and non-fiction books. Nine of her works have been made into films, most notably Black Narcissus in 1947.

A few of her works were co-written with her older sister, novelist Jon Godden, including Two Under the Indian Sun, a memoir of the Goddens' childhood in a region now part of Bangladesh. 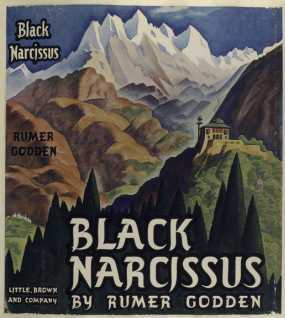 Godden was born in Eastbourne, Sussex, England. She grew up with her three sisters in Narayanganj, colonial India (now in Bangladesh), where her father, a shipping company executive, worked for the Brahmaputra Steam Navigation Company. Her parents sent the girls to England for schooling, as was the custom of the time, but brought them back to Narayanganj when the First World War began.

Godden returned to the United Kingdom with her sisters to continue her interrupted schooling in 1920, spending time at Moira House Girls School in Eastbourne and eventually training as a dance teacher. She went back to Calcutta in 1925 and opened a dance school for English and Indian children. Godden ran the school for 20 years with the help of her sister Nancy. During this time she published her first best-seller, the 1939 novel Black Narcissus. 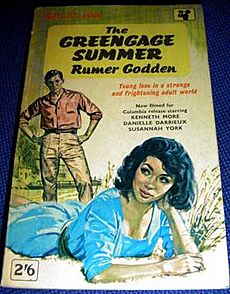 In 1942, after eight years in an unhappy marriage (one she entered into in 1934 because she was pregnant), she moved with her two daughters, Jane and Paula, (her husband Laurence Foster having joined the army) to Kashmir, living first on a houseboat and then in a rented house where she started a farm. The novel Kingfishers Catch Fire was based on her time in Kashmir. After a mysterious incident in which it appeared that an attempt had been made to poison both her and her daughters, she returned to Calcutta in 1944. She returned to the United Kingdom in 1945 to concentrate on her writing, frequently moving house but living mostly in Sussex and London. She was divorced in 1948. After returning from America to oversee the script for the movie of her book The River, Godden married civil servant James Haynes Dixon on 26 November 1949.

In the early 1950s Godden became interested in the Catholic Church, though she did not officially convert until 1968, and several of her later novels contain sympathetic portrayals of Catholic priests and nuns. In addition to Black Narcissus, two of her books deal with the subject of women in religious communities. In Five for Sorrow, Ten for Joy and In This House of Brede she acutely examined the balance between the mystical, spiritual aspects of religion and the practical, human realities of religious life.

A number of Godden's novels are set in India, the atmosphere of which she evokes through all the senses; her writing is vivid with detail of smells, textures, light, flowers, noises and tactile experiences. Her books for children, especially her several doll stories, strongly convey the secret thoughts, confusions, disappointments and aspirations of childhood. Her plots often involve unusual young people not recognised for their talents by ordinary lower- or middle-class people but supported by the educated, rich, and upper-class, to the anger, resentment, and puzzlement of their relatives. She won a 1972 Whitbread award for The Diddakoi, a young adult novel about Gypsies, televised by the BBC as Kizzy.

In 1968 she took the tenancy of Lamb House in Rye, East Sussex, where she lived until the death of her husband in 1973. She moved to Moniaive in Dumfriesshire in 1978, when she was 70, to be near her daughter Jane. She was appointed an Officer of the Order of the British Empire (OBE) in 1993. She visited India once more, in 1994, returning to Kashmir for the filming of a BBC Bookmark documentary about her life and books.

Rumer Godden died on 8 November 1998 at the age of 90 after a series of strokes; her ashes were buried with those of her second husband in Rye.

All content from Kiddle encyclopedia articles (including the article images and facts) can be freely used under Attribution-ShareAlike license, unless stated otherwise. Cite this article:
Rumer Godden Facts for Kids. Kiddle Encyclopedia.