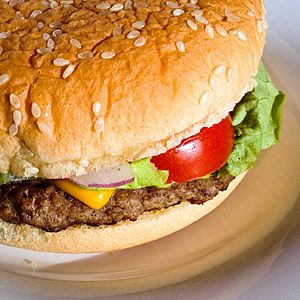 A Rustlers burger, with salad items added by the customer

Rustlers are a range of hamburgers and hot sandwiches made by Kepak, a company based in Dublin, Ireland. Each product in the range comes packed with a sachet of sauce appropriate for the food. Several products are now also packaged with a slice of processed cheese and/or a rasher of bacon.

The focus of the marketing is on the short cooking time and the use of a microwave oven to heat the food.

The brand's marketing campaigns appear to be aimed at young men who may prefer convenience food. This can be seen in marketing involving desirable young women, and the original television advert involving young men taking modified microwaves to "cruise" style events.

In 2012, two online adverts for the brand were banned by the ASA because they were sexually provocative.

In 2007 the brand became associated with the "Eat Late Eat Safe" campaign. This is an effort by UK fire services to spread awareness about the dangers of cooking while under the influence of alcohol, particularly aimed at university students. The brand is particularly suitable for this purpose because of its reliance on microwave ovens, which are generally regarded as less likely to cause fires. Rustlers' involvement in the cause involves a section linking to the campaign's site on its own website, and the distribution of free samples and money-off coupons during a tour of UK universities. The campaign's awareness leaflets are given out with the samples and coupons.

All content from Kiddle encyclopedia articles (including the article images and facts) can be freely used under Attribution-ShareAlike license, unless stated otherwise. Cite this article:
Rustlers (convenience food) Facts for Kids. Kiddle Encyclopedia.