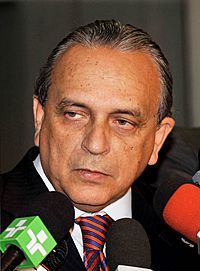 Severino Sérgio Estelita Guerra (9 November 1947 – 6 March 2014) was a Brazilian economist and politician. His last political positions in public life were as the national president of the PSDB federal. He served as deputy senator for Pernambuco.

All content from Kiddle encyclopedia articles (including the article images and facts) can be freely used under Attribution-ShareAlike license, unless stated otherwise. Cite this article:
Sérgio Guerra Facts for Kids. Kiddle Encyclopedia.