The Kress Building is a building located in downtown Portland, Oregon, listed on the National Register of Historic Places. 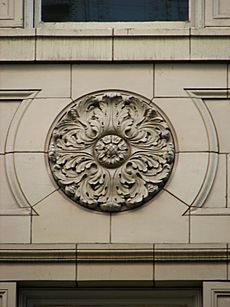 A glazed terra cotta rosette ornament from the Kress Building.

The five-story store and office building is located on the northeast corner of SW Fifth Avenue and Morrison Street in the center of Portland's retail district. It was built for S. H. Kress & Co. in 1928 from plans by their corporate architect, E. J. Hoffman.

The steel frame building rests on a concrete foundation. Its exterior is faced entirely with cream colored glazed terra cotta, enhanced with a variety of classically inspired decorative motifs. The roof is flat. The footprint of the building is rectangular; its original 100 square feet was extended to the east by a 50 × 100-foot single story wing in 1953 when an adjoining building was acquired and faced with terra cotta to conform with the rest of the block.

The store's design is in the Commercial style of the Chicago school, with detailing in the Classical vein. It exhibits the retail base including mezzanine level and multiple stories capped with a full classical entablature that are characteristic of Commercial style emporiums. The attic, or parapet wall above the cornice carries the store's title in escutcheons centered on either street face. While the entire scheme is conservative, especially in consideration of its late date, it is a generally well-preserved and well-crafted part of the aggregation of fireproof tall buildings dating from the 1910s and 1920s which distinguishes Portland's central business district.

All content from Kiddle encyclopedia articles (including the article images and facts) can be freely used under Attribution-ShareAlike license, unless stated otherwise. Cite this article:
S. H. Kress and Co. Building (Portland, Oregon) Facts for Kids. Kiddle Encyclopedia.