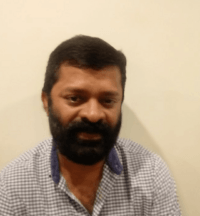 K. R. Sachidanandan (1972 – 18 June 2020), professionally credited as Sachy, was an Indian screenwriter, director, movie producer, author, poet, and theatre artist. He was known for his work in the Malayalam movie industry.

In his solo career as a screenwriter, he wrote Run Baby Run and his directorial debut with Anarkali (2015).

All content from Kiddle encyclopedia articles (including the article images and facts) can be freely used under Attribution-ShareAlike license, unless stated otherwise. Cite this article:
Sachy (writer) Facts for Kids. Kiddle Encyclopedia.