Saint-Paul is the second-largest commune in the French overseas department of Réunion. It is located on the extreme west side of the island of Réunion.

Until 1999, near Saint Paul there was the 428 metres tall mast OMEGA Chabrier transmitter.

Saint-Paul will be the western terminus of the proposed Réunion Tram Train (abandoned project). 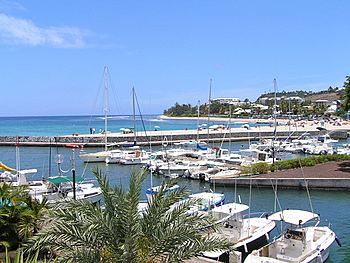 All content from Kiddle encyclopedia articles (including the article images and facts) can be freely used under Attribution-ShareAlike license, unless stated otherwise. Cite this article:
Saint-Paul, Réunion Facts for Kids. Kiddle Encyclopedia.