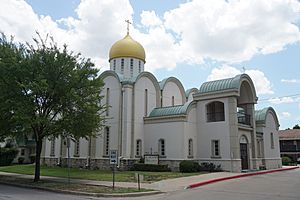 Saint Seraphim Cathedral, located near downtown Dallas, Texas, is the primary episcopal seat of the Diocese of the South, sharing its status with Christ the Saviour (Orthodox) Cathedral in Miami Lakes, Florida. The namesake of the Cathedral is Saint Seraphim of Sarov.

In April 1954, a small group of converts to the Orthodox Faith (Rev. Ilya Rudolph Rangel, rector of the already existing Mexican Orthodox Church under the jurisdiction of Bishop Bogdan (Spylka), Dmitri Royster, a subdeacon in Bishop Bogdan's jurisdiction, and Miss Dmitra Royster) sought permission of their bishop to organize an English-language Orthodox mission in the city of Dallas. It may be stated parenthetically that the three above-mentioned persons were working, at the time of the organization of St. Seraphim's, in close cooperation with ROCOR's St. Nicholas Russian Orthodox Church, of which Father Alexander Chernay of Houston was pastor and which held services periodically in the chapel of the Sunday School building at St. Matthew's Episcopal Cathedral. Father Ilya and Subdeacon Dmitri set out to find a building that would be suitable to house the activities of the projected mission. Property was located at the corner of McKinney Avenue (3734) and Blackburn Street. The sale price of the property was $15,000, and since the financial resources of the organizers were limited. Father Ilya and Subdeacon Dmitri went to seek the aid of Mr. Paul Raigorodsky, a member of St. Nicholas' Parish. Mr. Raigorodsky agreed to make it possible for the group to acquire a loan from the First National Bank in Dallas in order to purchase the property (on which there was an eight-room two-story house). The property was bought in the name of St. Seraphim's Church. Services in English began to be held in June 1954. Father Ilya conducted occasional services—Sunday Vespers weekly and an early Liturgy once a month. Father Ilya and Subdeacon Dmitri constructed an iconostasis and made a number of shrines and articles, and a chapel was arranged on the first floor of the house. After a month or two the members of St. Nicholas' Parish were invited to use the chapel, since one of their members had been so instrumental in the acquisition of the property. On November 6, 1954, Subdeacon Dmitri was ordained to the priesthood by Bishop Bogdan and became rector of St. Seraphim's Church (After Fr. Ilya departed from the Orthodox Church to the Baptist Church)

Shortly afterwards, it was agreed to transfer the title of the property at 3734 McKinney to St. Nicholas' Church. It was further agreed that the two groups would use the chapel, St. Nicholas' Church 1 weekend per month and St. Seraphim's Church the rest of the time. In January 1955 an extensive renovation program was undertaken, and both floors of the house were redecorated, sheet-rocked and painted. Father Hilarion Madison had been ordained by Bishop Bogdan on October 31, 1954, and had worked with Father Ilya Rangel as assistant pastor at the Mexican Church until December 1954, when he joined the work at St. Seraphim's and became assistant to Father Dmitri. For a few months joint services were held on the occasions when Father Alexander Chernay visited Dallas ; that is, Father Dimitri and Father Hilarion concelebrated with Father Alexander.

In March 1955, Bishop Bogdan directed Father Dimitri and Father Hilarion to begin mission work in Fort Worth, taking advantage of the weekends when Father Alexander was in Dallas, in order to extend the benefits of the missionary activity to a group of Orthodox residents of that city. Services were held in the chapel of St. Andrew's Episcopal Church in downtown until the summer of 1956. In order better to pursue its mission as an English-language parish and to attract orthodox people of all national backgrounds, St. Seraphim's Church decided to acquire property of its own. A house was bought at 4203 Newton Avenue, and a chapel, meeting room, office and kitchen were arranged in the house after considerable renovation. This building served the needs of the parish until the new church was built in March and April 1961. The house was then converted into a parish hall. In 1962, an adjacent lot with its house were bought by the parish. The house is being renovated at present and will eventually be used for a rectory. In September 1958 the parish was transferred from the jurisdiction of Bishop Bogdan to that of Metropolitan Leonty, the Russian Metropolia. Membership in St. Seraphim's parish has grown from the original 3 to approximately 125 souls (in 1963). Average attendance at the Sunday Liturgy has increased year by year and is now about 75 (in 1963). A Sunday School with two classes is maintained (in 1963). Services are held regularly on Wednesday, Saturday, and Sunday evenings, and the Liturgy is celebrated on Sundays and on holy days.

After the creation of Diocese of the South in July 1978 Saint Seraphim's was elevated from a parish to a cathedral with Bishop Dmitri in its cathedra. Its current rector is Archimandrite Gerasim (Eliel) (also the Diocesan Administrator) who succeeded Archpriest V. Rev. Fr. John Anderson as rector. Currently the diocese's locum tenens is Metropolitan Tikhon who succeeded Archbishop Nikon as, again, locum tenens.

Currently the time established schedule continues: Services are held regularly on Wednesday, Saturday, and Divine Liturgy is celebrated on Sundays and on holy days. Liturgies in Spanish and Church Slavonic are held once a month on Saturdays.

Plans for a Chapel and Bell tower were in the works as of 2013, after a few set backs the Chapel building is now complete.

All content from Kiddle encyclopedia articles (including the article images and facts) can be freely used under Attribution-ShareAlike license, unless stated otherwise. Cite this article:
Saint Seraphim (Orthodox) Cathedral Facts for Kids. Kiddle Encyclopedia.