Brooke Army Medical Center has a history which dates back to 1879 when the first Post Hospital opened as a small medical dispensary located in a single-story wooden building. In 1886, the first permanent hospital was built. In 1908, an 84-bed Station Hospital was constructed on the west side of the post.

In 1929, Brigadier General Roger Brooke assumed command of the Station Hospital, a position he held until 1933. Brooke is credited with instituting the first routine chest X-ray in military medicine. In July 1936, the cornerstone was laid for the construction of a replacement Station Hospital. By November 1937, the new 418-bed hospital was operational, having cost $3 million. The new hospital was the first in a series of moves which changed Fort Sam Houston from an Infantry to a medical Post.

In 1941, the Station Hospital prepared for an overwhelming flow of casualties from World War II battlefields by converting a 220-person enlisted barracks into additional patient wards.

In 1942, the Station Hospital was renamed Brooke General Hospital in Brooke's honor. In 1944, BAMC converted a Cavalry Battalion barracks into a convalescent unit to accommodate the flow of casualties from the war. This building later became Beach Pavilion. Beach housed a substantial portion of BAMC assets to include patient wards and specialty clinics.

In 1946, Fort Sam Houston was chosen as the new site for the U.S. Army Medical Field Service School. The decision to centralize the Army's medical research and training at one location resulted in the renaming of Brooke General Hospital to Brooke Army Medical Center. In September 1987, the official groundbreaking took place for the construction of a new hospital. 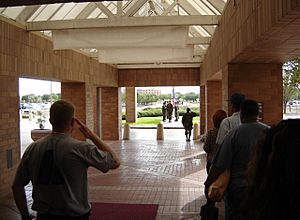 Folding the US flag at the BAMC main entrance in 2005.

On July 18, 1995, ownership of the replacement hospital was given to the BAMC Commander by the U.S. Army Corps of Engineers during the key turnover ceremony. On March 14, 1996, the new facility was officially dedicated and on April 13, BAMC opened for business with the transfer of inpatients from the "old" BAMC to the "new" BAMC.

Today "old" BAMC is home to United States Army South and a number of smaller units.

Because of the 2005 Base realignment and closure, Brooke Army Medical Center's inpatient absorbed those of the Air Force's Wilford Hall (Wilford Hall no longer provides inpatient care) creating San Antonio Military Medical Center (SAMMC) on September 6, 2011. As of 1 Oct 2017, the designation SAMMC was removed and BAMC continues to represent the headquarters that serves as the command for the entire hospital along with the medical clinics on Fort Sam Houston, others in the San Antonio area, and one at the Army Depot in Corpus Christi. The collaboration between BAMC and local Air Force Medical assets are governed by the San Antonio Military Health System (SAMHS).

San Antonio Military Medical Center (SAMMC) — the inpatient capabilities at Brooke Army Medical Center (BAMC)— is situated at Fort Sam Houston, San Antonio, Texas, and is part of the U.S. Army Medical Command (MEDCOM). BAMC is the command element over all Army medical facilities in the San Antonio area, including SAMMC (SAMMC is no longer the term used; BAMC is the name of the hospital and is responsible for the administrative and clinical oversight of the Army healthcare facilities in San Antonio). The term SAMMC solely applies to the inpatient capabilities within the hospital at Brooke Army Medical Center (BAMC). The hospital as a whole as well as the outlying clinics are considered BAMC. It is a University of Texas Health Science Center at San Antonio and USUHS teaching hospital and is home to the U.S. Army Institute of Surgical Research Burn Center. The USAISR Burn Center is part of the U.S. Army Medical Research and Development Command located at Fort Detrick, Maryland.

BAMC is the only MEDCOM Level I trauma center in the Department of Defense, and is part of the Regional Health Command Central (RHC-C).

Under BRAC 2005, BAMC will expand its inpatient services as those services are relocated from the 59th Medical Wing, Wilford Hall Medical Center (USAF). The Nuclear Medicine service is one of the first to completely integrate operations, and offers PET/CT, SPECT/CT, and other molecular imaging and therapy services.

To accomplish the realignment of inpatient services and related specialty care from Wilford Hall Medical Center (WHMC) to Brooke Army Medical Center (BAMC) as presented in the BRAC 2005 scenario, BAMC will undergo the construction of a consolidated tower, a parking facility, a central energy plant, and renovations within the existing facility.

Construction began in March 2009 on the nearly 738,000 sq ft (68,600 m2) project. CoTo was added on the east side of the facility adjacent to the clinical building and medical mall. This addition houses administrative space, an outpatient pediatrics clinic, an expanded Emergency and Trauma department, a SICU, a CCU, a psychiatric unit, and an expansion of the USAISR Burn Center which has 16 Burn Intensive Care Unit beds and 24 Progressive Care beds. SAMMC will serve as a health science center for inpatient and ambulatory care, consisting of training for Graduate Medical Education (GME), a Level 1 Trauma Center. The USAISR Burn Center is the only American Burn Association verified Burn Center within the DoD.

Construction began in March 2009 on a multi-level, 5,000-space parking structure to accommodate the increased capacity at the upgraded medical facility.

Due to the size increase in the BAMC facility, additional heating and cooling capacities are being provided with a 22,400-square-foot (2,080 m2) central energy plant, which is under construction.

All content from Kiddle encyclopedia articles (including the article images and facts) can be freely used under Attribution-ShareAlike license, unless stated otherwise. Cite this article:
Brooke Army Medical Center Facts for Kids. Kiddle Encyclopedia.