The San Diego City Council is the legislative branch of government in San Diego, California. The council has a Strong-mayor system. The council was made in 1850. There are nine members of the council. City council members serve a four-year term and can only have two back to back terms.

Council members earn $75,386 a year. The Salary Setting Commission wanted to make their salaries $175,000 instead, but the city council all decided to vote against it.

The members of the council have the power to introduce and pass laws. They also vote on new laws presented to them. For a law to pass, the council must have at least five votes for the law. The mayor, executive branch, can veto laws. The council can remove his veto with at least six members voting against the veto. 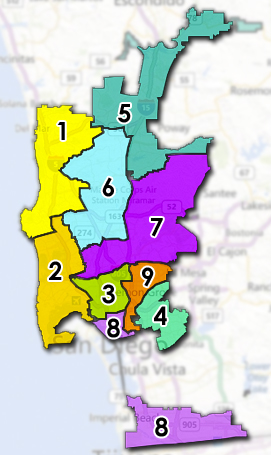 All content from Kiddle encyclopedia articles (including the article images and facts) can be freely used under Attribution-ShareAlike license, unless stated otherwise. Cite this article:
San Diego City Council Facts for Kids. Kiddle Encyclopedia.