The San Diego History Center is a museum showcasing the history of San Diego, located in the city's Balboa Park. 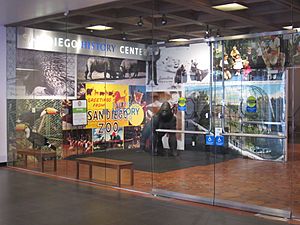 Inside the San Diego History Center

Of special note among the museum's collections are the Historic Clothing and Textile Collection, which includes over 7,000 items illustrating the history of dress from the late 18th century to the present, and the San Diego Fine Art Collection, notable for its early 20th century plein air paintings, with works by Maurice Braun, Alfred Mitchell, Charles Fries, Belle Baranceanu, Charles Reiffel, Alice Klauber, and Donal Hord.

The photograph collection, with 2.5 million photographs, is one of the largest regional photography collections in the United States. It includes a large number of 19th and early 20th century images of the San Diego region acquired in 1979 from the Union Title & Trust Insurance Company; important additions to the collection in the 1980s and 1990s include the entire collection of the San Diego Union-Tribune newspaper prior to 1981. Highlights of the photograph collection include the Edward H. Davis Collection of Indian Photographs and Drawings, 1900s-1940s, and the Norman Baynard Collection of the African-American Community of Logan Heights, 1939-1985.

Since 1955 the center has published the Journal of San Diego History in cooperation with the University of San Diego. In 2013, the History Center became a Smithsonian Affiliate.

All content from Kiddle encyclopedia articles (including the article images and facts) can be freely used under Attribution-ShareAlike license, unless stated otherwise. Cite this article:
San Diego History Center Facts for Kids. Kiddle Encyclopedia.