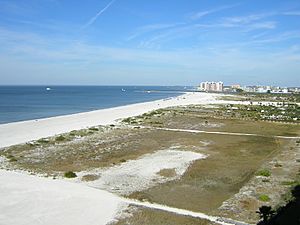 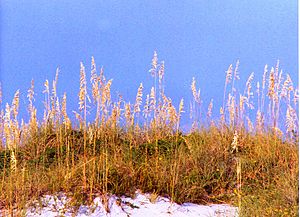 The Clearwater portion of the island includes Sand Key Park (a Pinellas County park south of Clearwater Beach). It closes at dark, has picnic and fishing accommodations, a nature trail, beach concession stands, and very spacious parking lots. By contrast, the main part of Clearwater Beach is so densely developed that it can be difficult to navigate by car. In 2012, the parking meters in Sand Key Park, under the jurisdiction of the county government, were removed in favor of a flat daily rate system ($5). These two islands as well as the island containing the Island Estates neighborhood belong to the city of Clearwater, whose downtown core a.k.a. "Cleveland Street District" lies a couple of miles to the east over the Clearwater Memorial Causeway.

All content from Kiddle encyclopedia articles (including the article images and facts) can be freely used under Attribution-ShareAlike license, unless stated otherwise. Cite this article:
Sand Key (barrier island) Facts for Kids. Kiddle Encyclopedia.