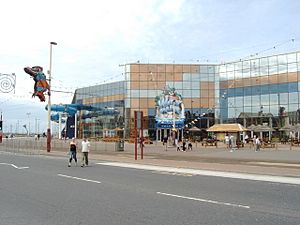 Sandcastle Waterpark is an indoor waterpark in an 84-degree tropical climate located at South Beach in Blackpool, Lancashire, England. It opened in 1986 on the site of the former South Shore Open Air Baths as a joint public/private partnership.

Family attractions include the Ushi Gushi Action River, the Shimmering Shallows and the Typhoon Lagoon Wavepool.

For younger visitors there is a Caribbean Storm Treehouse which is an interactive adventure play area with a giant tipping coconut that cascades 600 gallons of water over unsuspecting guests. There are also a range of water cannons, mini slides and jets within the HMS Thundersplash and Fort Riptide areas.

Operation of the centre was taken back into Blackpool Council ownership in 2003. Reductions in costs and increases in visitor numbers and spending have since followed. A significant investment in new attractions costing £5.5M was also agreed, which was delivered in two phases, with the second opening in 2006 on time and on budget.

In 2012, the water park opened two new Aztec theme slides, one with a chamber called 'Aztec Falls', and a toboggan like slide called 'Montazooma.'

All content from Kiddle encyclopedia articles (including the article images and facts) can be freely used under Attribution-ShareAlike license, unless stated otherwise. Cite this article:
Sandcastle Water Park (Blackpool) Facts for Kids. Kiddle Encyclopedia.