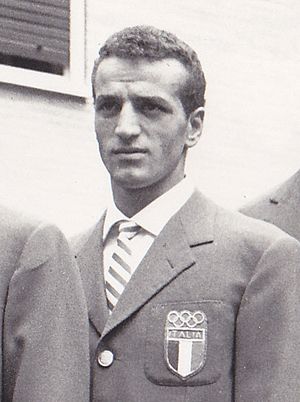 Sandro Lopopolo (18 December 1939 – 26 April 2014) was an Italian light welterweight boxer who was born in Milan. Lopopolo won the silver medal at the 1960 Summer Olympics in Rome. He fought as a professional from 1961 to 1973. Lopopolo held the light welterweight titles from Italy, Europe and the World at times during his career. When Lopopolo retired from boxing he had a record of 58 wins (20 KOs), 10 losses and 7 draws. Lopopolo died after a long respiratory illness on 26 April 2014 in Milan. He was 74.

All content from Kiddle encyclopedia articles (including the article images and facts) can be freely used under Attribution-ShareAlike license, unless stated otherwise. Cite this article:
Sandro Lopopolo Facts for Kids. Kiddle Encyclopedia.