Sandy Balls is 120 acres (0.49 km2) of woods and parkland near the New Forest in Hampshire, England. Located between the village of Godshill and the town of Fordingbridge, it is bounded on the western edge by the River Avon. Now run as a holiday centre, Sandy Balls is owned by Away Resorts. 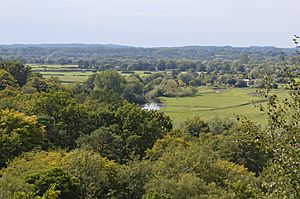 The estate's name has been traced as far back as the reign of Henry VII. It appeared on maps and other documents of the time as "Sandyballas," which is the description given to the dome-shaped sand and gravel outcrops on the western boundary of the site. Many of these outcrops remain, including ones called Good Friday Hill and Giant's Grave.

Due to the estate's name having a humorous sound in Modern English colloquial usage, Sandy Balls has been used in various jokes and comedies.

On the comedy panel show Have I Got News For You, guest host Alexander Armstrong introduced a promotional video for Sandy Balls that made fun of the resort's name. 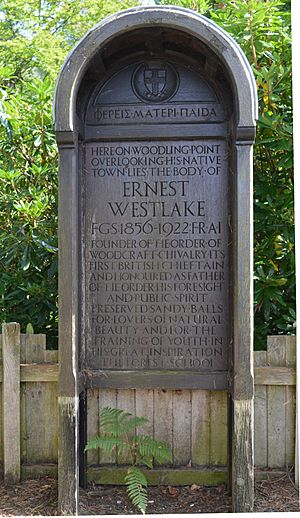 Grave of Ernest Westlake on a path to the River Avon

In 1919 the estate came up for sale to pay for death duties which arose on the death of Sir Edward Hulse in the first World War. Ernest Westlake, an anthropologist stimulated by the ideas and work of Ernest Thompson Seton bought the land as a site for his newly formed youth movement the Order of Woodcraft Chivalry. After the death of Ernest his son Aubrey Westlake carried on his ideas and the forerunner of Forest School Camps was established. The first Head master was Cuthbert Rutter, Aubrey's cousin.

The estate also served as a home for Grith Fyrd during the 1930s.

During the war the estate served as temporary accommodation for evacuees and for families whose main bread winner was on active service. A large air raid shelter was built and a Red Cross post established.

The area has a wide range of wildlife and approximately 75% of the site is covered with vegetation which has been very carefully managed to allow native species to flourish. A steep path runs down to the River Avon.

All content from Kiddle encyclopedia articles (including the article images and facts) can be freely used under Attribution-ShareAlike license, unless stated otherwise. Cite this article:
Sandy Balls Facts for Kids. Kiddle Encyclopedia.