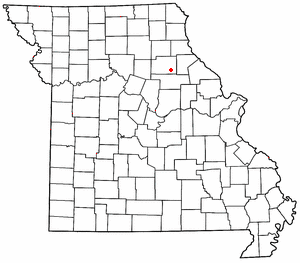 Santa Fe is an unincorporated community in southeastern Monroe County, Missouri, United States. It is located about twenty-five miles north of Mexico, Missouri near the southern edge of Mark Twain Lake. The Clemens family (of which was Samuel Clemens, a.k.a. "Mark Twain") owned several tracts of land in the area.

Santa Fe was founded in 1836 and named for Santa Fe, New Mexico. A post office called Santa Fe has been in operation since 1854.

The Mark Twain State Park Picnic Shelter at Buzzard's Roost was listed on the National Register of Historic Places in 1985.

All content from Kiddle encyclopedia articles (including the article images and facts) can be freely used under Attribution-ShareAlike license, unless stated otherwise. Cite this article:
Santa Fe, Missouri Facts for Kids. Kiddle Encyclopedia.