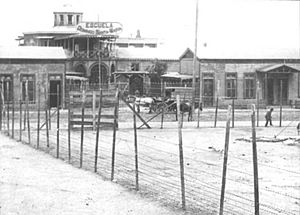 The workers had been walking from saltpetre mines of Tarapacá, striking to get better life conditions.

The strikers first went to San Lorenzo, and then to Iquique. They arrived in Iquique on December 16. They stayed peacefully in the school. Military forces arrived, and without provocation General Silva Renard give the order to shoot the people there in front of school. Hundreds of people were killed.

All content from Kiddle encyclopedia articles (including the article images and facts) can be freely used under Attribution-ShareAlike license, unless stated otherwise. Cite this article:
Santa María de Iquique School Massacre Facts for Kids. Kiddle Encyclopedia.