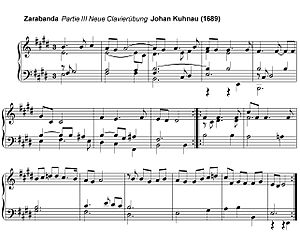 A Sarabande in binary form by Johann Kuhnau

A sarabande (spelt sarabanda in Italian), is a dance that was popular in Baroque music in the 17th and early 18th centuries.

Composers of the Baroque period often composed a group of several dances. This was called a suite. There was usually an allemande, a courante, a sarabande and a gigue, in that order, and sometimes one or two other dances or as well.

The sarabande seems to have come from Central America where it was known as "zarabanda". Although it was mainly used in the Baroque period, composers in the 20th Century such as Debussy, Satie, Howells and Britten sometimes wrote sarabandes.

Perhaps the most famous sarabande is one written by an unknown composer. The piece is called La folie espagnole. Many Baroque composers such as Monteverdi and Corelli and even some modern ones used this well-known tune.

The sarabande has been used a lot in movies, including one by Ingmar Bergman called Saraband (2003). It uses the sarabande from the 5th suite for solo cello by Bach.

All content from Kiddle encyclopedia articles (including the article images and facts) can be freely used under Attribution-ShareAlike license, unless stated otherwise. Cite this article:
Sarabande Facts for Kids. Kiddle Encyclopedia.