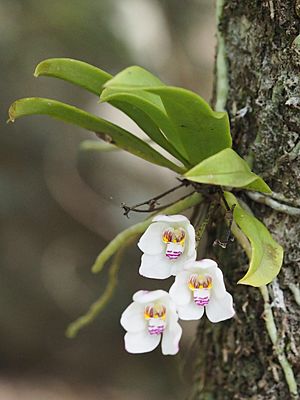 Sarcochilus falcatus, commonly known as the orange blossom orchid, is a small epiphytic or lithophytic orchid that is endemic to eastern Australia. It has up to eight, leathery leaves with fine teeth on the edges and up to twelve white to cream-coloured flowers with a white labellum that has orange and purple markings.

Sarcochilus falcatus was first formally described in 1810 by Robert Brown who published the description in Prodromus Florae Novae Hollandiae et Insulae Van Diemen. It was the first species of Sarcochilus to be described and is therefore the type species. The specific epithet (falcatus) is a Latin word meaning "sickle-shaped" or "curved", referring to the shape of the leaves.

The orange blossom orchid grows on trees but sometimes on rocks, usually in places exposed to air movement, clouds and drizzly weather. It grows in the Cedar Bay National Park in Queensland and south to the coast and nearby tablelands of New South Wales. It rarely occurs in the far north-eastern corner of Victoria.

This orchid is classed as "endangered" under the Victorian Government Flora and Fauna Guarantee Act 1988.

All content from Kiddle encyclopedia articles (including the article images and facts) can be freely used under Attribution-ShareAlike license, unless stated otherwise. Cite this article:
Sarcochilus falcatus Facts for Kids. Kiddle Encyclopedia.