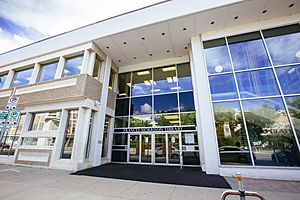 The Alice Turner Branch is located at 110 Nelson Road. The current facility replaced the smaller Sutherland Branch in December 1998. It was renamed after Alice Turner McFarland who was a library employee for 37 years and chief librarian from 1981 to 1989. The first library in Canada to be built to the standards of C-2000 construction, Canada's environmental building code, Alice Turner Branch was expanded to double its original size in 2013.

The Carlyle King Branch is located at 3130 Laurier Drive. It officially opened October 16, 1979 and is currently located in the Cosmo Civic Centre. Carlyle King Branch was the first branch library to be part of a multi-purpose facility in Saskatoon. The branch was named in honour of Carlyle King who, in addition to a distinguished academic career, was actively involved in the Saskatchewan Library Advisory Council, the Saskatchewan Library Association and the Saskatoon Public Library Board (1955-1972).

The Cliff Wright Branch is located at 1635 McKercher Drive. The Lakewood Library relocated when the Lakewood Civic Centre opened in October, 1988. The branch was officially opened on January 9, 1989, and was renamed after former mayor, Cliff Wright, on March 30, 1989.

The J.S. Wood Branch is located at 1801 Landsdowne Ave. It opened in 1961 and is named after James Stuart Wood, who was born in England in 1891 and worked as a college librarian before enlisting in the British Army. He came to Canada with his family in 1925, teaching in Nipawin and Prince Albert before taking the role of Chief Librarian at SPL in 1938.

The Dr. Freda Ahenakew Branch is located in the Monarch Yards Housing complex at the site of the Station 20 West Centre (100 – 219 Avenue K South). It was originally named the Library on 20th Street and renamed in 2017 to honour the legacy of Dr. Freda Ahenakew, in response to the Calls to Action of the Truth and Reconciliation Commission and in consultation with local Indigenous leaders.

The Rusty Macdonald Branch is located at 225 Primrose Drive. It opened in 1989, as part of the Lawson Civic Centre, a multipurpose facility also housing a wave pool, weight room and exercise room. It is named after R. H. "Rusty" Macdonald, journalist, author, photographer and dedicated library trustee (1960-1981).

The Round Prairie Branch is located at 170 – 250 Hunter Road. The branch was named in honour of the La Prairie Round (or Round Prairie) Métis, who were a community of buffalo hunters that established a wintering site near Dakota Whitecap in the late 1800s. In the 1920s and 1930s many in the community were forced to migrate to Saskatoon in search of work, and by the 1940s they had established a permanent and close knit community near the current site of the new SPL branch.

The Writer in Residence program at the library is co-funded by the Canada Council for the Arts.

All content from Kiddle encyclopedia articles (including the article images and facts) can be freely used under Attribution-ShareAlike license, unless stated otherwise. Cite this article:
Saskatoon Public Library Facts for Kids. Kiddle Encyclopedia.