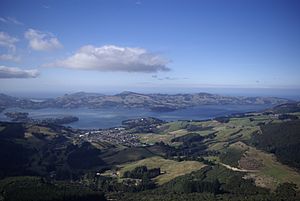 Sawyers Bay is a suburb of the New Zealand city of Dunedin. It is located 1.5 kilometres (0.93 mi) to the southwest of Port Chalmers in a wide valley on the shore of Mussel Bay, 13 kilometres (8.1 mi) to the northeast of Dunedin city centre.

The suburb, on the western shore of Otago Harbour, lies between the two rocky headlands of Port Chalmers in the east and Roseneath in the west. The South Island Main Trunk rail line and State Highway 88 run along the shore of the bay.

The name of the suburb is indicative of the occupation of many of its early settlers; the Sawyers Bay area provided much of the timber used in the early construction industry around both Dunedin and Port Chalmers area. Little remains of Sawyers Bay's early industries; it is now largely a residential suburb.

Sawyers Bay's residential area is situated around one long street which runs inland from the bay itself. This street is called Station Road at its coastal end, and Hall Road further inland. At the coastal end, it connects with State Highway 88, the highway which runs along the west coast of Otago Harbour from Port Chalmers to Dunedin via Saint Leonards and Ravensbourne. Inland from here, roads branch off the main road – the most important of these is Stevenson Avenue, which connects with a back road to Port Chalmers (Borlases Road) in the east, and with Upper Junction Road in the west. Upper Junction Road, the winding old road to Port Chalmers from the Dunedin suburb of North East Valley, rises to join with the old Mount Cargill road, which was itself the former main road north out of Dunedin, linking the city's main urban area at Normanby with Waitati.

Other notable features of Sawyers Bay include the Port Chalmers Golf Course, located in the north of Sawyers Bay. A bush walk, Grahams Bush, links the end of Hall Road with the Mount Cargill road. Sawyers Bay's most prolific family is the McLachlan clan, whose tenement dates back to pre-European settlement. Its current population base is now comprised by residents reliant on the marine environment and a large contingent of Firefighters

All content from Kiddle encyclopedia articles (including the article images and facts) can be freely used under Attribution-ShareAlike license, unless stated otherwise. Cite this article:
Sawyers Bay Facts for Kids. Kiddle Encyclopedia.