Kids Encyclopedia Facts
(Redirected from Saxon Switzerland)
This article is about the tourist and climbing area. For the administrative rural district, see Sächsische Schweiz Rural District. 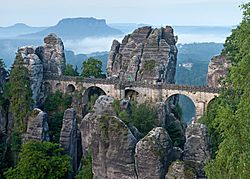 Sächsische Schweiz has some 1,000 climbing peaks, as well as several hollows. The area is popular with Dresden locals and international climbers.

The administrative district for the area is Sächsische Schweiz Rural District.

Sächsische Schweiz area has a number of fortresses built to protect trade routes; remaining fortresses include Festung Königstein and Castle Hohnstein. Hardly anything is left of other castles and fortresses.

The area became popular with tourists during the 19th century. Romantic artists were inspired by the beauty of wilderness, like the painter Ludwig Richter or the composer Carl Maria von Weber, who set his famous opera Der Freischütz with its Wolfsschlucht ("wolf's gorge") scene near the city of Rathen.

Saxon Switzerland is characterized by its sandstone rocks which draw many rock climbers. At the beginning of the 20th century the 'Saxon Rules' for rock climbing were made, the first ever of their kind worldwide.

All content from Kiddle encyclopedia articles (including the article images and facts) can be freely used under Attribution-ShareAlike license, unless stated otherwise. Cite this article:
Sächsische Schweiz (tourism) Facts for Kids. Kiddle Encyclopedia.