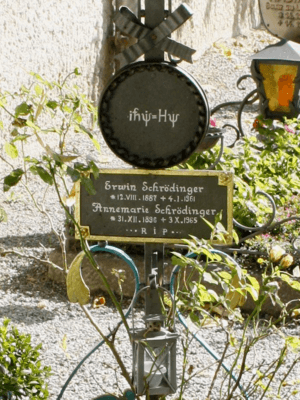 Schrödinger's equation inscribed on the gravestone of Annemarie and Erwin Schrödinger. (Newton's dot notation for the time derivative is used.)

The Schrödinger equation is a differential equation (a type of equation that involves an unknown function rather than an unknown number) that forms the basis of quantum mechanics, one of the most accurate theory of how subatomic particles behave. It is a mathematical equation that was thought of by Erwin Schrödinger in 1925. It defines a wave function of a particle or system (group of particles) which has a certain value at every point in space for every given time. These values have no physical meaning (in fact, they are mathematically complex), yet the wave function contains all information that can be known about a particle or system. This information can be found by mathematically manipulating the wave function to return real values relating to physical properties such as position, momentum, energy, etc. The wave function can be thought of as a picture of how this particle or system acts with time and describes it as fully as possible.

The wave function can be in a number of different states at once, and so a particle may have many different positions, energies, velocities or other physical property at the same time (i.e. "be in two places at once"). However, when one of these properties is measured it has only one specific value (which cannot be definitely predicted), and the wave function is therefore in just one specific state. This is called wave function collapse and seems to be caused by the act of observation or measurement. The exact cause and interpretation of wave function collapse is still widely debated in the scientific community.

For one particle that only moves in one direction in space, the Schrödinger equation looks like:

is the reduced Planck's constant,

is the wave function, and

is the potential energy, an as yet not chosen function of position. The left hand side is equivalent to the Hamiltonian energy operator acting on

Assuming that the wave function,

, is separable, i.e. assuming the function of two variables can be written as the product of two different functions of a single variable:

where the first equation is solely dependent on time

, and the second equation depends only on position

is just a number. The first equation can be solved immediately to give

is Euler's number. Solutions of the second equation depend on the potential energy function,

, and so cannot be solved until this function is given. It can be shown using quantum mechanics that the number

is actually the energy of the system, so these separable wave functions describe systems of constant energy. Since energy is constant in many important physical systems (for example: an electron in an atom), the second equation of the set of separated differential equations presented above is often used. This equation is known as the Time independent Schrödinger Equation, as it does not involve

All content from Kiddle encyclopedia articles (including the article images and facts) can be freely used under Attribution-ShareAlike license, unless stated otherwise. Cite this article:
Schrödinger equation Facts for Kids. Kiddle Encyclopedia.