The Science Museum Oklahoma is a science museum in Oklahoma City, Oklahoma. The museum is home to the Kirkpatrick Planetarium and a number of specialized galleries.

The museum began as the Kirkpatrick Planetarium in 1958, which moved to a permanent dome at the Oklahoma State Fairgrounds in 1962. Later that year, the Oklahoma Science and Arts Foundation was founded on the fairgrounds. In 1978 the foundation changed its name to Omniplex Science Museum, then moved with the Kirkpatrick Planetarium to the newly built Kirkpatrick Center museum campus. Later additions include the Oklahoma Air and Space Museum in 1980, the Kirkpatrick Gardens and Greenhouse in 1985, and the OmniDome Theater, Oklahoma's first large-format, dome-screen theater, which opened in 2000. In 2007 Omniplex changed its name to Science Museum Oklahoma. Since the rebranding the museum has undergone extensive remodeling, adding numerous new exhibits and galleries, including a kid-friendly space exhibit and art galleries.

CurioCity, pronounced "curiosity," is a 20,000-square-foot village featuring eight whimsical neighborhoods where familiar meets the fanciful as children get a taste of the wonderful world of science. Each neighborhood has its own personality that allows you the opportunity to explore a scientific concept utilizing interactive devices and unusual settings to encourage learning through play. A children's museum inside a museum, larger than most children's museums in the nation. 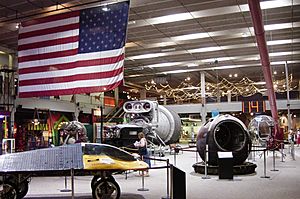 This section of the museum preserves and honors the contributions of Oklahomans to aerospace. Notable artifacts include the Apollo Command Module simulator, an Apollo Lunar Module replica built by Canadian inventor William Lishman, and artifacts related to Oklahoman aviator Wiley Post. Some of the artifacts are currently on loan to the Oklahoma History Center, which opened in November 2005.

The museum houses the Oklahoma Aviation and Space Hall of Fame, which has a new first floor exhibit with an interactive kiosk featuring pictures and biographies of the inductees. One of the inductees is Eula Pearl Carter Scott. The main exhibit hall with historical exhibits including full-scale models of Mercury, Gemini and Apollo capsules as well as the actual Apollo Command Module Simulator used to train Apollo astronauts, is currently closed for construction. The room can still be seen from a balcony in an obscure AWAC exhibit. 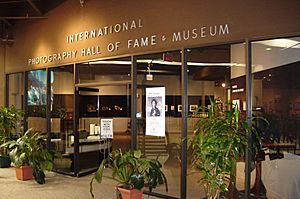 The International Photography Hall of Fame and Museum relocated to St. Louis, Missouri in 2013 and no longer resides at the Science Museum.

This gallery was formerly a tribute to the art and technology of photography. It was home to the world's largest "photo-mural", a laserscape of the Grand Canyon.

Formerly located at the Science Museum Oklahoma, the Red Earth Museum and office relocated to downtown Oklahoma City in early 2010, to 6 Santa Fe Plaza, next to the historic Skirvin Hotel. The museum examines Native American cultures and lifestyles.

The International Gymnastics Hall of Fame is located inside Science Museum Oklahoma, and features collections of medals, apparatus, and awards, various pieces of sculptures, and a library. The organization dedicated to honoring those who have furthered the sport of gymnastics. Inductees include Nadia Comăneci, Olga Korbut, Bart Conner, Valeri Liukin, Mary Lou Retton, Larisa Latynina, Nikolai Andrianov, and Věra Čáslavská.

The Dome Theater (originally OmniDome Theater prior to the museum being called Omniplex) closed on September 7, 2015 due to the age of the theatres production equipment and difficulty finding properly formatted film. It was an un-branded Iwerks theater running 15-perf 70 mm film, the same format as IMAX.

All content from Kiddle encyclopedia articles (including the article images and facts) can be freely used under Attribution-ShareAlike license, unless stated otherwise. Cite this article:
Science Museum Oklahoma Facts for Kids. Kiddle Encyclopedia.