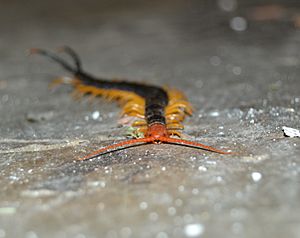 It is aposematically colored, to warn off potential predators, and a number of color variants are known in the species. The castaneiceps variant found in Arkansas, Missouri, Texas, and other nearby areas is commonly known as the "giant redheaded centipede" or "Texas redheaded centipede" because of its distinct red head and greenish black body and tail.

S. heros is found in northern Mexico and the southwestern United States, from New Mexico and Arizona in the west to Arkansas, Missouri, and Louisiana in the east. Although this species is commonly referred to as the "giant desert centipede" because of its presence in the Sonoran Desert and other arid habitats, S. heros is also found in rocky woodland areas, such as in Arkansas. It remains underground on warm days, emerging in cloudy weather.

S. heros is primarily a nocturnal predator and hunts invertebrates and small vertebrates, including rodents, reptiles, and amphibians. It is capable of reaching into the air to grab small flying insects. The centipede uses its venom to subdue prey.

S. heros hatch from eggs. The immature centipedes are known as nymphs. As they grow and mature, like all arthropods they shed and molt away their exoskeleton. Each time they molt they enter a new stage of its life cycle called an instar. During these growth stages they tend to grow more legs, starting with around 10 legs and growing up to 18 or more after each successive molting. These arthropods can live up to 5 years and even longer depending on environmental conditions.

The venom of S. heros is similar to the venom of other Scolopendra species, although much more potent than that of other species, including components such as serotonin, histamine, lipids, proteins (including cardiotoxic proteins and enzymes such as hemolytic phospholipase A), and other substances. The mixture is known to act as a cytolysin, compromising cellular membranes and rupturing cells. S. heros venom also contains toxins targeted to its prey: one toxin numbs the nervous system of insects, rendering them unable to sense or escape, while another toxin interferes with the autonomic nervous system of vertebrates to make small vertebrates easier to subdue and devour. The exact effects and makeup of the venom have not been thoroughly evaluated, in part because it is difficult to extract in significant quantities and quickly deteriorates when processed.

S. heros bites are very painful to vertebrates. A rat bitten by S. heros in the leg showed signs of excruciating pain, followed by soreness, but returned to normal after five hours. For humans, a bite from S. heros usually causes sharp, searing, local pain and swelling, but has never caused any confirmed deaths. S. heros bites are known to occasionally cause nausea, headache, and localized skin necrosis. However, there are individual cases of severe symptoms and injury (including kidney failure due to rhabdomyolysis, and heart attack) in humans resulting from Scolopendra bites.

All content from Kiddle encyclopedia articles (including the article images and facts) can be freely used under Attribution-ShareAlike license, unless stated otherwise. Cite this article:
Scolopendra heros Facts for Kids. Kiddle Encyclopedia.