Screen on the Green (Atlanta) facts for kids 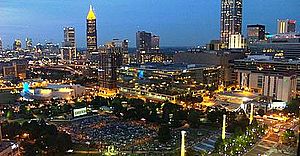 Overhead view during the screening in Centennial Park

Screen on the Green is an annual summertime event in Atlanta's Piedmont Park. Originally sponsored by Turner Classic Movies, the event has been hosted during the last few years by local Atlanta television station Peachtree TV. Screen on the Green consists of free movies shown on a large screen outdoors. The event typically draws between 5,000 and 10,000 people for each film. Through the 2007 series screen, tents, glass containers, pets, and grills are not allowed at the event.

Due to drought conditions in Piedmont Park during the 2008 and 2009 seasons, the event was temporarily moved to Centennial Olympic Park. It returned to Piedmont Park for the 2010 season.

In 2010, several of the early movies were disrupted by altercations including several acts of random violence. While additional security was provided for later movies, many long-time attendees were shaken by the events.

All content from Kiddle encyclopedia articles (including the article images and facts) can be freely used under Attribution-ShareAlike license, unless stated otherwise. Cite this article:
Screen on the Green (Atlanta) Facts for Kids. Kiddle Encyclopedia.